Fifty Shades Darker” — sequel to the 2015 film “Fifty Shades of Grey” — is a train wreck. Everything in this movie, from the plot to the characters, is pure garbage and makes my head hurt. It follows the main character, Anastasia Steele (played by Dakota Johnson) as she continues her toxic relationship with Christian Grey (played by Jamie Dornan).

This film hits a lot of the same notes as the last one, with only a few changes in the plot, and it feels like the exact same movie. One of my biggest gripes with the film is the character of Anastasia. At the end of the first film, she breaks off her relationship with the abusive Christian. At the start of the sequel, they run into each other and decide to get back together. She tells Christian that things need to be different this time around, which implies that she learned something since their previous breakup. However, this “development” is thrown out the window and the same toxic relationship that Anastasia left in the previous film resumes. Anastasia is a complete imbecile — one of the worst written characters I have ever seen.

Christian is also a character that I heavily disliked. He is still abusive and controlling, and their relationship is pretty much the epitome of a horrible and unhealthy one. This is a glaring problem, because most of the movie revolves around these two’s relationship.

In romance movies like these, you need to care about the characters — especially the leads — to enjoy it. If you don’t, the movie is just going to drag on and the audience will lose complete investment in the film. That is what happens in “Fifty Shades Darker.” 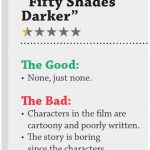 Besides Christian and Ana, there are several other poorly written characters that make you wish you weren’t in the theater. One of these is Ana’s boss, Jack Hyde, played by Eric Johnson. Jack perfectly encapsulates the definition of unwanted sexual attention in the workplace; he does everything in his power to show he is a creep and he is a walking lawsuit waiting to happen. For example, Jack stops Ana from leaving his office — in the middle of the workday, mind you — and starts asking questions about her sex life in vivid detail. These two have had no prior sexual relationship; they, up to that point, had been strictly professional. To some, this may come off as romantic, but to me, it is the furthest thing from it. It is so cartoony and unrealistic that it’s hysterical to see someone act like this.

One other character that was implemented horribly is the stalker, Leila Williams — played by Belle Heathcote — who continuously hounds Ana and Christian. She was in a relationship with Christian before he met Ana, and only appears a couple of times throughout the movie. Leila serves as a source of conflict in the story but does not make much of an impact, so she could have easily been written out without changing the pace or the narrative of the movie.

“Fifty Shades Darker” is a waste of time. It is a disaster of a film and an embarrassment to the industry. The fact that this movie exists is appalling and the fact that this is the second film in a trilogy is terrifying.

Review: ‘The Edge of 17’: The perfect depiction of high school

Review: ‘Nioh’ is a samurai epic