Hail, Caesar! is the Coen brothers’ latest film, a star-studded comedy set in Hollywood’s golden age. It follows Eddie Mannix, who works for a studio as a “fixer,” someone who keeps the actors’ scandals hidden, and he is forced to deal with the kidnapping of a major star, all the while juggling the rest of his duties.

It’s a plot that allows the filmmakers to have a large ensemble cast, and the actors are one of the highlights of the movie. Eddie is played by Josh Brolin, who embraces the role of the no-non­sense fixer, willing to do anything to avoid bad press for the studio, whether it involves covering up an “illegitimate” pregnancy or a kidnapping. His gruff­ness belies a passion for the job, which comes across through Brolin’s nuanced performance. George Clooney plays Baird Whitlock, an actor held for ran­som. Clooney gives a strong comedic performance, but the funniest actor in the movie is Channing Tatum, who plays another of the studio’s stars.

Tatum also gets to show off his song-and-dance skills in a musical number, which showcases both the strengths and weaknesses of the film. It’s a well-shot, nicely choreographed, tongue-in-cheek scene, but it also comes across as self-indulgent. It feels like it’s in the movie to show how well the filmmakers can do a 1950s style musical scene, rather than to advance character devel­opment or plot. Is it bad? No! But for the length of the scene, it feels like it should have more payoff, either in terms of relevance to the movie or in laughs. 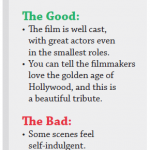 This is recurring throughout the movie—scenes appear to poke fun at the film industry at the time, but they feel more wrapped up in the details of the era than being connected to the plot. It’s a comedy, so of course there should be laughs, but these scenes, while not unfunny, are only mildly hu­morous. Scarlett Johansson looks prim and ladylike, but isn’t! Ralph Fiennes is struggling to direct an actor who can’t act! It elicits some laughs, but nothing hearty—at its heart, Hail, Caesar! is a light movie.

This isn’t necessarily a bad thing. Not all movies need to be deep, weighty pieces, delving into the human psyche. Hail, Caesar! may be on the shallow side, but it’s a beautiful shallow. The visuals exquisitely recreate the grandeur of films of the 1950s, taking the setting of a film studio and using it to highlight various genres. Musicals, dramas, West­erns, and epics are all showcased, show­ing the glory and poking fun at the behind the scenes events. It’s clear the filmmakers love the 1950s era, and even when they’re making jokes about it, it’s not mean-spirited.

Overall, Hail, Caesar! is a movie that gets by on its admittedly impressive cast and its looks. Its plot is an excuse to have more set pieces, which may get some laughs, but in the end, it’s more about the era than the comedy. Is it worth watching? Sure! The visuals are made for the big screen, and it’s cer­tainly not a bad movie. You’ll get a few chuckles out of it, although not as many as you’d expect from a comedy. Just don’t expect a movie that’ll stay with you—it’s pleasant, but at its heart, for­gettable, just like so many films from Hollywood’s golden age.

The Merc with the Mouth: Deadpool Review

UWT Speaks Up Against Proposed Plant