It seems like there have been fewer thrillers released lately, so Money Monster felt like a welcome change. The movie features an A-list cast, directed by Jodie Foster and starring George Clooney and Julia Roberts. Its plot follows Clooney as a financial talk show host, who is taken hostage live on air by an angry man who lost money investing based on his tips and wants to get revenge on the system. Money Monster has a strong setup, but is it a thriller worth waiting for?

That depends on what you want from a thriller. When I’m watching a thriller, I want excitement and surprises, and if there’s a twist at the end, that’s just icing on the cake. While Money Monster can be exciting, it’s almost completely void of surprises. You can guess the identity of the real villain practically the moment he’s mentioned, and even though they act like finding out what happened to the missing money is important, it doesn’t actually add anything to the story.

At its heart, Money Monster is yet another “Wall Street is bad” movie, and it doesn’t bring anything particularly new or exciting to the table. Its biggest problem is that it can feel preachy at times, and unless you really want to pay money to have a millionaire director have millionaire actors convey how a different type of multimillion dollar business is evil, it’ll make your eyes roll.

This is especially true whenever the hostage-taker, Kyle, played by Jack O’Connell, speaks. He acts like he has the truth and the right to be morally indignant, but in the end, he’s still the guy who decided to take a TV studio hostage just because his investment failed. It’s hard to have any sympathy for him, even if the system is stacked against the little guy, as, in the end, he’s still a bad person who threatens and shoots innocent people. The character who’s supposed to be the “real” villain comes across as a 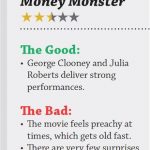 cardboard cutout of an evil businessman, but despite how he’s shown to be stereotypically bad, the only place he ever hits anyone is in the wallet, and that’s not even intentionally. There are Scooby-Doo villains more threatening than him.

Despite this, there are still things to like about the movie, mainly the performances of George Clooney and Julia Roberts. Clooney plays Lee Gates, an over-the-top financial talk show host and Roberts plays Patty Fenn, his long-suffering producer. The two have great chemistry and you want to see them both get out of the situation alive. It’s also nice to see a pair of opposite sex leads that aren’t shoved into a romantic relationship by the end—their friendship is enough. Clooney also gets the chance to act wild and over the top, which gives extra life to the movie.

In the end, Money Monster’s problems boil down to preachiness and genre. It probably would have been much better as an action movie, as less mystery is needed and there are plenty of places in which the movie could have had strong action scenes. It could have kept its message of “big business is evil” but as action movies are generally less talky, it would have been more palatable.

As it is, Money Monster is an okay movie, though I wouldn’t recommend shelling out your own money to see it in theaters. It’s worth a Netflix, but not ten bucks.

Pierce the Veil Lightens Up