You’ve probably heard the name M. Night Shyamalan before, the director best known for The Sixth Sense and his shocking twist endings. However, in this point in his career, after notorious flops like The Happening and After Earth, the twist would be for him to make a good movie. While The Visit isn’t as bad as his other recent films, that doesn’t make it good.

The plot of The Visit is simple – two teenagers, Rebecca and Tyler, go to visit their grandparents, who they’ve never met before, thanks to a feud they had with their mother. Rebecca decides to make a documentary of this occasion, giving the film its excuse to fall into the foundfootage category. However, once they get there, they soon notice that their grandparents are acting strangely. As the movie unfolds, Rebecca and Tyler try to discover what’s wrong with their grandparents, all while supposed to be following their strict bedtime of 9:30 pm.

As everyone expects, there is a twist near the end of the film. I won’t spoil it for you, but it’s a solid twist, one that I didn’t see coming, and one that makes sense in the context of the story. If all you wanted out of the film was a good twist, then you’re in for a treat.

However, if you wanted a good movie, not just a good twist, you’re facing a letdown. Most of the film just isn’t that interesting. While you aren’t waiting eagerly for the main characters to die, like in some horror movies, you aren’t overly invested in their well-being either.

Rebecca, the budding filmmaker played by Olivia DeJonge, is a pretentious teenager, sometimes eye-rollingly so, while Tyler, her 13-year-old brother, played by Ed Oxenbould, is an aspiring rapper, which can be cringeworthy. Tyler is supposed to be a germaphobe, but it feels like the film often forgets it. He’s fine doing things like crawling under a house, and the payoff for his germaphobia is a scene in which he wouldn’t have to be germaphobic to be grossed out. 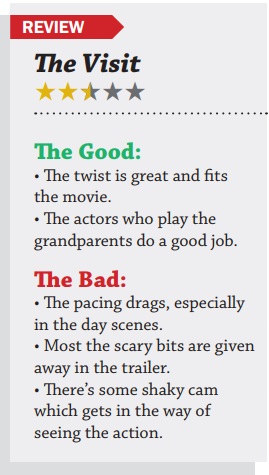 The grandparents, Nana and Pop Pop, played by Deanna Dunagan and Peter McRobbie, do come across as interesting, if not often scary. There is something strange going on with them and you want to know what it is. However, they act more normal than not during the day scenes, and it’s in the night scenes where things really get interesting. Unfortunately, most of the day scenes drag on, leaving you wishing for the movie to hurry up and get to the night scenes again.

Unfortunately, most of the movie isn’t scary. If you’ve seen the trailer, you’ve seen most of the scary bits in the movie. If you’re in the mood for a good scream, you’ll probably only get it towards the end, with the reveal of the twist and the fight that follows. Before that, the movie is just not that spooky. Are the grandparents strange before that? Sure, but strange alone doesn’t make a good horror movie. What it makes, in this case, is a mediocre horror movie with a great twist ending.

So, if you want to see a horror movie in theaters, it’s doubtful that The Visit will be your best bet. With so many other horror movies being released in October, there’s almost guaranteed to be a better horror movie for you to watch. If you do go and see The Visit, you won’t have your time wasted, but you won’t be transfixed by horror either.

REVIEW: Maze Runner: The Scorch Trials: As Generic as Generic Can Be