“The Edge of 17” is likely the most surprising movie of the year. What looks like just another teen chick flick turns out to be a deep and moving film. It didn’t make many waves when it came to theaters in 2016, but “The Edge of 17” has lately gotten stellar reviews from all types of moviegoers.

This movie tells the story of Nadine Franklin, a high school junior whose life starts falling apart after her lifelong best friend, Krista, starts dating her older brother, Darian. The rest of the movie shows Nadine’s struggles with feelings of inadequacy from living in her brother’s shadow as well as typical high school drama.

What is so phenomenal about this movie is the realistic yet heartbreaking situations that Nadine is put in. “The Edge of 17” should be such a sad movie. However, with exceedingly talented actors like Woody Harrelson and Hailee Steinfeld, this movie ends up, somehow, almost being a comedy. 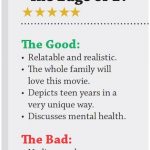 Each character has their own niche and full personality, which adds generously to the authenticity of the film. Harrelson’s character, Mr. Bruner, is a good example of how the characters develop and grow throughout the story. Despite his lack of screen time, he ends up developing into a completely different person than what was shown in the body of the movie. Erwin, Nadine’s friend, also turns out to have much more going on than what I originally assumed.

Nadine’s story is tied up in her dealing with depression, which is subtly discussed throughout the story. After hitting rock bottom, she told her brother that she felt like she was “floating outside of [her] body, looking down at [her]self and […] hat[ing] what [she] [saw].” To the viewer who takes things literally, it may seem like the movie simplifies depression and anxiety. Nadine’s situation is actually a realistic scenario — she ends up with a good guy who loves her and treats her well and she ends up repairing relationships that were damaged by what she was going through.

What is so realistic about the ending of “The Edge of 17” is that you’re left with the question of whether Nadine continue to “hate what she sees” or if she is finally happy. The movie depicts her as being mostly happy by the end.

“The Edge of 17” wraps so many genres into one fabulous movie. Fans of indie films, teen flicks, comedy and more will no doubt be obsessed with this impeccably done movie.

Calling the traveller in you: 10 places to visit before you die