“Nioh” is a prime example of how a game can be influenced by another game but still maintain its own identity and aesthetic. There are many elements in “Nioh” that feel familiar to the game “Dark Souls.” For example, “Nioh” has a soul-crushing non-adjustable level of difficulty with a wide variety of bosses that have different designs and areas where the players must constantly be on their toes, the same as in “Souls.” The gameplay is a third-person RPG, also similar to the Dark Souls franchise.

This game takes historic characters and adds in its own blend of fantasy to them. For example, players will assume the role of real historical figure William Adams, an English sailor, as he travels to Japan to search for someone who has threatened his country. During this journey William slowly starts to become a demon-hunting samurai. The story itself is solid, but it didn’t really manage to peak my interest as much as the interaction of the characters and the supernatural elements in the game which give it both a sense of seriousness and goofiness. The goofiness comes from the little spirits that William meets throughout the game. Both the design and the personality of these spirits are cute and funny, creating a positive atmosphere. 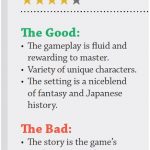 Besides playing a part in the narrative, the spirits also play a role in the gameplay. During certain sections of combat, when a meter is filled to maximum, William can enter a short duration of invulnerability with the spirit possessing him, granting him power. This increases the damage William does on enemies and changes his playstyle. He can swap out spirits when he rests at an altar, which are scattered throughout the map. Altars also serve as reset-points for William if he is low on health or needs to level up. However, doing this will cause enemies to respawn throughout the map. This creates a unique situation where players must decide whether to rest or hold out. The cautious nature created by this feature mirrors the rest of the gameplay.

Besides the variety of weapons in the game, such as the Japanese sword, katana, there are also different fighting style or stance options that players can use while in combat. These stances create a variety in gameplay, with different ones being either faster or able to cause more damage. Each stance brings with it its own consequences as well as benefits, such as the high stance dealing more damage but the least amount of speed.

“Nioh” is a fun game that both fans of the Soul series and the role-playing genre will love. It’s worth a purchase, and will keep you busy for days with its long story and difficult nature.

Possible tuition freeze in the near future