Jordan Peele and Keegan-Michael Key had already made their mark on popular culture with their hit comedy series, Key & Peele, so making a movie was the next logical step. That movie is Keanu, an action-packed comedy about two cousins who have to pretend to be gangsters in order to get back Keanu, a stolen kitten. Yes, the movie is as silly as it sounds.

And yes, it works.

The best thing about the movie is the chemistry between its stars, Jordan Peele as Rell, a laid back stoner, and Keegan-Michael Key as Clarence, a straight-laced family man. They play well off each other and you can feel the camaraderie between them. They feel like real people who you would like to hang out with, even if they also come across as dorks who are in way over their heads.

What makes Keanu so funny is that Rell and Clarence always feel like they’re one step away from total disaster. Clarence in particular comes across as one of the least gangster-like people alive, and seeing him trying to fit in is hilarious. At one point, he has to convince a car full of gangsters that ‘80s musician George Michael is a thug in order to look cool. The only thing bad about this is that at times it is hard to suspend your disbelief and accept that the gang would actually fall for his act. However, the situation is funny, and it’s easy to forgive flaws like that when you’re laughing.

Another great thing about Keanu is that everything is played straight. People die over the adorable kitten Keanu, and it’s never questioned. People are willing to throw away thousands of dollars to keep the kitten. The more serious the characters take the situation, the funnier it gets. No one stops to think if it’s worth it to get in a shootout over a kitten. 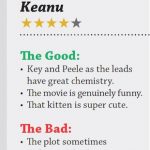 As Rell and Clarence are infiltrating a gang, there’s plenty of opportunity for action, and there are several strong action sequences throughout the movie. The opening scene feels like something from the cult movie The Boondock Saints, with a pair of men shooting up a place in crazy action movie style. If it wasn’t for things like a tiny kitten running around, this wouldn’t be out of place in a normal action movie. In action comedies, it’s easy to neglect either the action or the comedy, but that’s not the case with Keanu. Both the action and the comedy come across strong.

Now, that doesn’t mean that every joke works. There’s a couple jokes that are over explained so they aren’t funny anymore, and one scene in particular, a drug-induced vision, feels out of place and short on laughs. However, for every joke that doesn’t work, there’s a couple more that do work, so there’s not much to complain about.

Overall, Keanu is well worth saving. Check it out in theaters, especially if you want to have a laugh. Just don’t bring kids with you—the poster may show an adorable kitten, but this movie is very much rated R.