A little over five years after the last Harry Potter movie released, lJ.K. Rowling is back with another invitation into the magic world. “Fantastic Beasts and Where to Find Them” focuses on Newt Scamander, played by Eddie Redmayne, a scatterbrained magizoologist whose love for fantastic beasts leads him to publish a guidebook that shares the same name as the movie.

Directed by David Yates, the same person who wrapped up the last four Harry Potter films, the movie has the habit of showing magical creatures leaning directly into the 3D cameras. At first, fans were skeptical about another J.K. Rowling movie. However, they began to welcome the idea once they realized that this is the same magical world they had grown to love from a different perspective.

The film begins in 1926 when Scamander enters Ellis Island with a bag of illegal and dangerous magical livestock which he wants to protect and study. This is supposed to be a simple stop during his travels, but due to his carelessness Scamander accidentally changes bags with no-maj (non-magic) Jacob Kowalski, played by Dan Fogler. Kowalski unwittingly releases some of those dangerous beasts into New York City and gets bitten by one of these creatures. The rest of the film consists of Scamander scrambling around the city to track down and capture the creatures before the situation worsens.

Although Redmayne did an outstanding job playing Scamander, it was hard to understand his character. The movie referenced his past very fleetingly and mentioned only a few facts about his background.

The city is also being threatened by a very rare, magical creature called an obscure — a dark, parasitical magical force. It becomes an obscurial when it attaches itself to a witch or wizard and can remove power from the city, as well as kill anyone in its way. Scamander becomes aware of the obscurial as he goes in search of his Niffler, a small rodent with a duck bill that is attracted to shiny objects. Every special effect in the film, from the fur of the niffler, to the insect-eating bowtruckle, was hand-crafted to look as realistic as possible. The animals came across as real — something one might come across on a hike — but with specific features that made them appear magical. The largest creature, the erumpet, was created as a mix of a rhino and a bison. 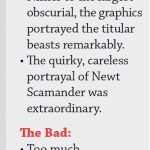 The movie is based at the same time that dark wizard Gellert Grindelwald has gone missing, causing the wizarding community to be on high alert. To protect themselves, wizards are hiding their powers from no-majs. Mary Lou Barebone, portrayed by Samantha Morton, is out to expose wizarding families as dangerous and ‘adopts’ children from the families she exposes. However, she does not care for her adopted son who is involved in the magical community by meeting with power-hungry auror (magical officer) Percival Graves.

Scamander teams up with no-maj Jacob Kowalski, ex-auror Tina Goldstien — played by Katherine Waterson — and her mind-reading sister Queenie to find and capture all the beasts before Percival Graves can sentence Scamander and Tina to death. Tina Goldstein’s flashbacks contribute to the main plotline and make it clear to the audience that there is more to come in the five part series. Rowling focuses on giving the audience as much information as they can retain to keep people ready for the sequel. There are many scenes that come off as cliffhangers. While this method is very successful in novels, when readers might be tempted to put the book down after a chapter, it fails on the big screen as the audience prefers to get all the information in one sitting. This disrupted the flow of the movie, and made some of the audience feel restless and jittery.

To summarize, the movie gives insight to a very important time in magical history that was only briefly touched upon before. It opens the door to an entirely different place in the wizarding world, and allows the audience to really see these “Fantastic Beasts.”