At first glance, High-Rise has a lot of things in its favor. It’s a thriller which looks especially cool, thanks to its retro setting, with a star-studded ensemble cast. Its concept, a glamorous high-rise apartment building with a dark side, is enough to draw you in. From the very first moments, High-Rise shows off its strongest and weakest features.

The strongest is easy to see, and instantly interesting: the visuals. High-Rise is set in the 1970s, and the film takes full advantage—even the title’s font looks retro. It’s always interesting to see how a film visualizes something from a different time period, and there’s plenty to look at. The supermarket, especially, looks like something straight from an advertisement in the 1970s, and the costumes manage to feel both dated and stylish. With the exception of a few of the outdoor shots of the building, which have a tendency to look too CGI’d, this is a grand looking film.

If you’d rather look at beautiful people than cool period details, there’s plenty of that too. There’s a large cast, with Tom Hiddleston as the central character, Dr. Robert Laing, a new tenant in the building. Elisabeth Moss, as a pregnant tenant, and Jeremy Irons, as the mysterious architect of the high-rise, also deliver stand out performances, with Irons in particular being a fascinating mix of controlling and delusional. There’s a lot to like about the actors in the film, as they all deliver believable performances and manage to elevate the material.

So, what’s not to like? The plot, or, more accurately, the execution of the plot. To begin, in the first scene we’re shown how life in the building has deteriorated, as well as a stack of mail pushed under Dr. Laing’s door. This not only takes away from the suspense of the ending, but it raises questions that are never answered in the film. Everything is centered around the breakdown of conditions in the building and how people cope, but we never get a convincing reason why they should continue staying in the building. There’s nothing stopping them from leaving. This isn’t a post-apocalyptic setting, though 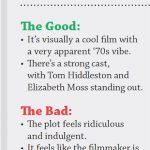 sometimes it feels like it ought to be. They’re in a high-rise which simply isn’t functioning correctly. It shouldn’t devolve into a Lord of the Flies type of situation. There’s no reason. Because of this, it’s hard to connect to the events in the film. If the characters aren’t doing the bare minimum we’d expect from a normal person, why should we care what happens to them?

Part of this may be because the filmmaker is clearly trying to make a “statement” with this film. However, just because you want to say something about society and the human condition and whatever other thorny topic, doesn’t mean you ought to abandon common sense. Character decisions don’t make sense, even in the world of the film—why do characters have a deep connection in one scene and then have them never communicate again? Why don’t characters simply leave the building? Why do the cops only show up once, despite the high rise clearly becoming ruinous? Again, there’s nothing wrong with making a statement—just make it in a way that makes sense within the film’s setting.

Overall, it’s hard to get past all the plot problems in High-Rise, despite its great cast and strong setting. It’s available to watch on demand and in theaters, but unless you really want to see Tom Hiddleston nearly naked on the big screen, I’d wait until it’s cheaper to rent.