A tale as old as time, King Arthur, a famous British legend, is not new to the world of cinema — plenty of adaptations have made it to the big screen. This version, directed by Guy Ritchie, attempts to tell an original story of Arthur (Charlie Hunnam), yet manages to make missteps throughout the entire two-hour run time.

The story starts off in the past when Arthur is just a baby and his father, Uther Pendragon (Eric Bana), is king. After defeating an army of enemy mages that threaten the land of Camelot, Uther is betrayed by his brother, Vortigern (Jude Law).

This opening sequence is the best moment in the entire film. It starts at the beginning of the conflict between Uther and the mages. Tand the viewer is immediately thrown into the chaos as the screen is cluttered with people fighting with swords and CGI particle effects.

Sadly, though, after this sequence, the story takesbegins to take a nosedive. After killing his brother, Vortigern then begins to kill off the rest of the Pendragon family. Arthur manages to escape and is then rescued and raised by prostitutes. All the while, he’s unaware of his royal identity. Once he does discover who he truly is, Arthur sets out to reclaim his throne and take his rightful place as the true king of Camelot.

The plot is nothing too complex. The setup is rather basic and the narrative of someone growing up ignorant of their identity only to later, after discovering who they are, set out for redemption or revenge has been done before.

Besides the simple story, the writing throughout the film is horrible. There’s a saying, “show, don’t tell” used to describe a successful narrative — one that is explained through imagery, the setting and the actions of the characters, rather than explicitly using words. Having exposition, or having the film directly explain what is happening, is poor writing. The entire movie is filled with this, which is frustrating. There are elements in the film that can be easily explained by allowing the current scene to play out — yet the film never gives it that chance. An instance of this is when Arthur has a flashback to when he was a child that explains the current dramatic situation. It could have been explained just as well in the current scene, yet it takes this lazy and unnecessary route of explanation instead. 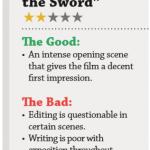 A lot of questionable editing choices accompany the poor writing. There are times where the scenes would go along at a normal pace then suddenly slow down or speed up. When Arthur grips the sword Excalibur, for example, he is haunted by visions of his dead father. To seek answers, he goes to a place called the Dark Lands to discover his true identity and purpose. Instead of allowing the audience to follow and feel his emotions during this time, scenes are crunched together in a montage — resulting in a poorly paced and underdeveloped part in the film.

Character interactions also feel disconnected at times. There will be moments of comedic relief among characters and instead of feeling natural, it is the complete opposite. Unrealistic terminology of the time is used, and instead of being witty or clever, it just felt off putting.

The film is a disappointing mess. “King Arthur: Legend of the Sword” tries to tell a story and fails to do that. It has elements that could have been great, yet exposition and horrible editing squandered it. This movie is not worth the time or energy to watch, it’s an insult to both previous King Arthur movie renditions and the legend itself.

Review: ‘Sense8’ is an emotional masterpiece