Lately, Marvel has been on a roll with their superhero movies. Spectacles such as The Avengers and Guardians of the Galaxy received overwhelmingly positive reviews from critics. The newest addition to the Marvel Cinematic Universe, Captain America: Civil War, continues the story of both Captain America and the superhero team the Avengers. When the movie was initially announced, fans of the comics had high expectations due to the Civil War being one of the bigger events in the Marvel Comics universe, which featured all the superheroes being split on different sides.

For me, the movie exceeded every expectation I had. One of the things that I loved was the premise. After recent events involving the Avengers, the government demands that the team sign a document that would make them a tool for the U.N. At this point Iron Man and Captain America have a falling out. Iron Man sides with the government and Captain America supports the team’s independence.

The film does a very good job of showcasing these two different sides. Civil War is the third installment in the Captain America series, and Captain America is the main character. Iron Man is then portrayed as the antagonist, but not necessarily a villain. The film gives open-ended answers to these themes. In some ways Iron Man is right, while in some ways Captain America is right. Because of this, there really is no right or wrong side to take in the story. There is an actual villain, but they don’t have much of a presence because their actions are never made clear. They don’t have any clear interactions with the other characters until the final section, making it feel as though the movie could have been made without the villain.

Like the plot, the acting is also very well done. Except for a few characters such as Hulk and Thor, all the heroes you are familiar with from previous Marvel films make appearances and put on good performances. This is especially true of the two main heroes, Captain America and Iron Man.

However, it is still primarily a Captain America film that expands upon his story. As such, the movie spends the most time with him. Chris Evans does a splendid job as Captain America. Even more surprising was Robert Downey Jr.’s performance as Iron Man. Not only do we get to see some of the same witty humor from Downey that we have seen in previous films, we also get to dive more into his past and see him grow as a character. The human aspect of Iron Man really shines in the movie and makes it more entertaining.

Civil War also introduces two new heroes to the Marvel Cinematic Universe, Spider Man and Black Panther. Though Spider Man is not new to the big screen, because of previous movies licensed by Sony, 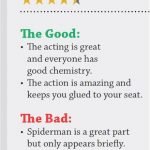 he is new to the Marvel Cinematic Universe. Tom Holland’s performance as Spider Man is authentic to the character displayed in the comics. He plays a young, inexperienced, hero. When he is on screen he meshes well with the other characters and steals the spotlight. However, he is not in the movie for long, and I wished we could have seen more of him.

Black Panther, played by Chadwick Boseman, is also one of the new characters introduced. With so many heroes, you’d think the movie would feel cramped, but that wasn’t an issue. Unlike other movies, such as Batman v Superman, the addition of different heroes doesn’t feel forced. Each character has a role and has great synergy with the other characters.

The action is incredible. One scene in particular where all the heroes clash is unlike anything I’ve seen done in other movies. Some of the fights had spectacular choreography and imagination behind them. It was like seeing a fight from the comics play out on the big screen. In one fight, Ant-Man uses his powers to shrink a truck and then throws that truck as it begins to grow back into normal size at another hero.

Captain America: Civil War is an excellent film with great action and writing. If you are a fan of action films, and a fan of the Marvel cinematic universe, do yourself a favor and go see this movie.

UW Students Get a Steal and a Show at Rainiers Games