It’s amazing how fast the young adult apocalypse wore out its welcome. It seemed like a million different franchises were trying to emulate “The Hunger Games,” and match its success. However, none of them have — not even the last two movies of that franchise. It’s hard to make characters who are too young to legally drink sustain the financial security of a genre that’s meant for “cool kids.” You know, the ones that occasionally swear, stare blankly and call it acting? It’s always the same premise too: fascists run the world, and it’s up to a goddamn high schooler to fix everything.

There are variations of this premise that can work. As long as a story is consistent with its own world, an audience can usually suspend their disbelief enough to enjoy it, but if not? It becomes an episode of “Mystery Science Theater 3000.” That’s bad for a genre that desperately wants you to take it seriously. It gets even worse when a certain film has all the tools it needs to succeed where others failed, and then adheres to trope anyway. Throw in some solar zombie disease, and you’ve got yourself “Maze Runner: The Death Cure.”

Thomas, played by Dylan O’Brien, sets out on a final mission to save one of his grody friends from WCKD, resident fascist organization holed up in the Last City on Earth. Will they rescue their friend and find a cure for the disease wiping everyone out?

There’s nothing wrong with a franchise trying to evolve its formula, but in this case, the title of “Maze Runner” is not exactly applicable to the scenario. No, the Last City is not a literal maze. “A metaphorical maze!” the internet shouts, “represented by the many obstacles, external and internal, that Thomas must face.” Well shoot, any grievance is a metaphor at that point. How the heck am I supposed to immerse myself into this movie if the title isn’t even right? That’s probably the least critical thing I have to say about this supposed trilogy cap.

Without giving too much away, there’s a method of finding a cure for the plague introduced that essentially renders the first two movies completely pointless. A lot of time and resources went into building an actual labyrinth for purposes that could have already been replicated with a monster-infested hedge maze. The film’s justification for not exploring the new method earlier was that it wasn’t as “effective” as the titular maze, but it was good enough anyway. I mean, that’s a pretty big hole in the fascists’ budget with no feasible returns, but their ineptitude grows more astounding as the movie continues. 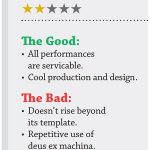 The goons have guns, but never use them. When a squad approaches the do-gooders mowing down their forces, they don’t fire. They wait patiently for Thomas to take his shot and look rad. It happens in a lot of movies, but this is an especially noticeable case. I lost count after three, but there are numerous scenes where a guard attempts to take a cast member prisoner, and doesn’t even try to stop them when they go for their weapons.

There’s also a lot of deus ex machina. Almost every action sequence proceeds with someone getting cornered and narrowly rescued. It was bizarre how many times it happened, which makes one character death near the end feel equally ludicrous. I’m not easily turned off by a flawed but serviceable story, but there’s a limit to how many weird narrative choices I’ll allow before my patience wears thin.

There are redeemable factors. O’Brien is a decent leading man, demonstrating an emotive range. Other characters get plot twists, not development. They’re still the same person before and after. Aiden Gillen incorporates his conniving antics from “Game of Thrones,” and gives his character, Jansen, a physical element, but he will not go down as one of cinema’s greatest villains. The action scenes, when they do pick up, are fine for what’s happening, and some shots used are very well done. There’s just that nagging feeling that it could’ve all been better by the end, and I think wasted potential is worse than none at all.