Possibly one of the most researched time periods in history, World War II transformed the path of humanity for ages to come. Through a variety of hor­ribly negative measures — including obscure experiments — the Nazi regime gained the world’s attention, as every nation on the planet attempted to put an end to their crimes. With a combination of dramatized speculation and storytell­ing, “Overlord” is a film that opens the viewer’s eyes to what might have occurred if the ally forces had not intervened — or worse, an extreme case of what may have been covered up.

The film follows Pvt. Boyce (Jovan Adepo) and the rest of his American airborne company — led by the short-fused Cpl. Ford (Wyatt Russell) — after their plane went down just outside a small town in France. They evade the inhabit­ing Nazi troops, and their fight for sur­vival begins shortly after they meet and escort Chloe (Mathilde Ollivier) to her nearby home — where they eventually confront Nazi commanding officer Waf­ner (Pilou Asbæk). When they aim to destroy an enemy radio tower, Boyce soon discovers their heinous plan to raise the dead — which takes precedence over the original objective.

Immediately, “Overlord” propels the audience into its action-packed theme. Within the first 10 minutes, bullets an­nihilate Boyce’s plane. The film’s level of intensity is quickly established with bru­tality and seemingly endless gore and cringe-inducing violence. While the R-rating may have hinted at what images would be seen in the film, it is a pleasant surprise that the producers fully utilized the rating and left no question as to why it was given. 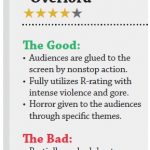 With horror and action serving as the main two genres, “Overlord” does not fulfill the promise it made to be type of horror movie audiences might expect. However, after attending a matinee view­ing, audiences may be left haunted by thoughts about the atrocities left unac­counted for by the Nazis — specifically, their countless vile experiments. The real horror of “Overlord” comes from the fact that the experiments depicted in the film aren’t incredibly exaggerated from what actually occurred. Cruel and inhumane, the film’s Nazi scientists are depicted performing experiments such as separat­ing limbs and spinal cords from their subjects and reanimating them.

Although the film is fairly enticing, the primary objective of Boyce and his team dramatically shifts towards the de­struction of the secret lab responsible for the impending disaster facing the French town. Despite the plot of the film being advertised as a struggle against the un­dead, i that part of the story doesn’t comes into play until really late in the film. This is a shame, especially with a run time of almost two hours. The ethics of the situ­ation are clear, but the seemingly effort­less deterrence from the initial mission is slightly unrealistic. The original plan is thrown out the window — despite the urgency stressed by every character in the film aside from Boyce.

While displaying seldom seen short­comings, “Overlord” possesses a unique, mysterious premise which captures thrill-seeking audience members easily. Non­stop action and vast amounts of viscera create an atmosphere that keeps viewers’ hearts pounding and their eyes wide open. Easily one of the most fast-paced movies of the decade, “Overlord” will continue to draw in viewers and keep them satisfied with a blend of shocking visuals and unique historical-fiction.