Marvel has lately swept the box office charts, most recently with “Avengers: Infinity War,” causing superhero fanatics to splurge on movie tickets. With the highly proclaimed 2016 movie “Deadpool,” audiences knew that a sequel would emerge sooner or later, and we would see Ryan Reynolds reprise his role as the loud mouth anti-hero.

“Deadpool 2” came out May 18, and Marvel fans welcomed the raunchy hero back into their hearts for a highly anticipated sequel that failed to disappoint.

Numbers skyrocketed at the box office, bringing “Deadpool 2” to the No. 2 R-rated movie at an estimated $125 million — ahead of the “It” comeback and a little behind the original “Deadpool.”

With how highly anticipated “Deadpool 2” was and how well it did in numbers during its first weekend, it is safe to say that the actual review of the film is impressive as well.

What was impressive? Let me start with this: There’s a featured LGBT couple. That’s right, Negasonic Teenage Warhead dates the super cute, bubbly Yukio (I ship this couple for life). Although neither of them play a main role, they both come in clutch at the end — but no spoilers here. The hallmark of having a same-sex couple is being praised, as it should be.

Without giving too many things away, I have to highlight that in this film, Deadpool has a heart. We’re all used to the smartass Deadpool, and although he is still that same brash character, we see a different side to him that is almost caring. In “Deadpool 2,” the new character Firefist 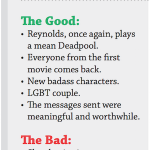 (Julian Dennison) is a significant role, and although I can’t ruin the juicy plot twists for you, I can say that there is an anti-bullying message. In light of bullying being such a disturbing reality in today’s time, it is enlightening to see superheros fighting off bullying and sending a strong, much needed message.

Regardless of all the pros this movie has to offer, there are still some noticeable flaws. For instance, the beginning was slow. After the main dramatic scene that takes place within the first five minutes, it gets depressing and rather slow. As the action picked up again and new characters — such as Cable, the supposed villain with an ulterior motive, and Domino, the badass beautiful Lady Luck — were introduced, their backstories were not touched on as much as I would have liked.

Other than that, Marvel’s latest addition to the Deadpool franchise was a complete success. We got everything that we loved from the first movie in this one: fourth wall breaks, Reynolds poking fun at himself (Stay for the mid-credit scene, and you’ll see) and seeing all of the familiar faces that we have grown to love — aka the taxi driver, Dopinder, and the sassy Blind Al). With all of this, it is easy to see why Deadpool is becoming one of Marvel’s fan favorites. All in all, if you loved the original “Deadpool,” you’ll equally love “Deadpool 2.”