Directed by Wes Ball, the same person who directed the first movie, Maze Runner. Maze Runner: The Scorch Trials is an adaptation of the second book in the Maze Runner series. It takes place straight after the other movie left off where the kids, after escaping the maze, are taken to a facility somewhere in a desert called the scorch. The kids eventually leave the facility in order to find a mysterious group of people to combat against W.I.C.K.E.D., the organization that held the kids in the maze in the first movie.

One of the things I enjoyed from the last movie was the execution of the premise. You have these kids trapped in a maze and then they have to work together to try to escape it. In addition, along the way you have this tension building between some of these kids until it reaches to the point of different sub groups forming within the group of kids. With The Scorch Trials, you just have a generic post-apocalyptic movie with the addition of an evil organization that has control and now people have to unite to defeat that organization. We have seen this done before with the movie, The Hunger Games.

To add something different to this idea, the movie contains zombies within the world. A virus in this world is affecting people like a disease and turning them into zombie like creatures. This is not new. All the things in this movie have already been done before. Because of this, this movie lacks individuality and is just mundane.

Besides the lack of originality, the film also falters because of the previous problems that the movie had. One example being how the plot progresses. In the previous movie, no information was told to the protagonist Thomas (Dylan O’Brien). Then, towards the ending of the movie, everything was revealed. You just do not hold back all the information in a movie then just release it in the final minutes. 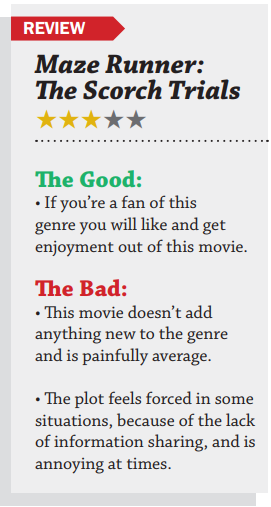 That is annoying to the audience and not the proper way to create a plot or setting. Information should be built up and information learned bit by bit, not all at once.

I will give this to The Scorch Trials; it is not as vague as the previous movie was. However, it still is rather annoying. One example being one of the kids going to tell another kid something, and then deciding not to. The reason behind this is “because it’s not important.” Yes, yes, it is important and we will not be able to find out that secret until sometime in the third movie.

There are however, a few noteworthy scenes in the movie. There is this one scene in particular where two of the characters are walking through the sewers and there is this tension in the air. You do not know whether the zombies are there, and it creates this suspenseful state of whether or not the two characters will be fine or not. The sound and the lighting also help with this tension building.

If you go see this movie and are a fan of the recent young adult movies that have come out and enjoy survival/zombie movies, you will get a kick out of this movie and find enjoyment with it. If you are a fan of the last movie, then it is worth going to go see this one. In the end Maze Runner: The Scorch Trials is a step back for the franchise and hopefully the third movie improves where the other two movies failed.

REVIEW: The Visit: Almost Worth a Visit