As the weather gets colder and the lights go up on neighborhood houses, it becomes hard to ignore the obvious: the holidays are fast approaching. Al­though some prefer to host an extrav­agant family dinner while others choose to celebrate indoors with hot chocolate, the one thing that everyone can agree on is that holiday films play a vital role for families during the holiday season. As one of the most beloved characters of the season, the Grinch finds his way into many viewers’ hearts every year. His famous heartwarming change in personality and the timeless story adored by all make “The Grinch” the perfect flick to watch this season.

The tale of “The Grinch” is one al­most as old as Dr. Seuss himself — with a few different variations. The story follows the original Seussian plot about the crotchety Grinch (Benedict Cum­berbatch) who spends his time shel­tered in a distant cave away from the town of Whoville. One day as the Grinch looks down on the Who village, he finds them in the midst of celebrat­ing his least favorite holiday: Christmas. Forced into Whoville to replenish his food supply, the Grinch encounters Cindy Lou Who (Cameron Seely), whose only Christmas wish is for her hard-working mother (Rashida Jones) to finally achieve relaxation. On his journey back to his cave, the Grinch passes his distant neighbor — Mr. Bricklebaum (Kenan Thompson) — who reveals to him that this year’s Who­ville wish is to make Christmas three times as big as its predecessors. Out­raged by this news, the Grinch slithers back to his cave as he realizes his only option is to steal the Whos’ Christmas once and for all.

“The Grinch” gives each of its char­acters a unique personality that allows viewers to sympathize with them on a personal level. Through the duration of the film, audiences experience a range of emotions for each character during their endeavors — from Cindy Lou’s quest to talk with Santa, to the Grinch’s plot to ruin Christmas for the whole town. Unlike the previous “How the Grinch Stole Christmas” adapta­tions, “The Grinch” exposes a more private side to the character’s life — fol­lowing the Grinch through his daily tasks and personal qualms. 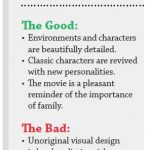 Today, animated movies face high expectations due to the recent ad­vancement in technology, and “The Grinch” does not disappoint. Set in the mountainous environment of Whoville and its outskirts, the film has plenty of opportunities to dazzle audi­ences with surprising realism. As light rays shine brilliantly through valleys and golden sunsets illuminate the set­ting, character and land alike are brought to life with stellar realistic lighting effects. Combined with texture details, the film is a visual achievement — which is not uncommon for the animation studio, Illumination.

Unfortunately for Illumination, character design hardly differentiates between movies. Viewers may notice the striking similarities between the Whos and the human characters in “Despicable Me” and a majority of the animals in “Sing.” While each character has a new story to tell, the emphasis on the Grinch’s mundane daily routine leaves much to be desired by viewers who expect the retelling of a classic story rather than the alternative ap­proach that this film takes.

While it may not meet the expecta­tions of the “How the Grinch Stole Christmas” original movie, ”The Grinch” continues to serve as a captivating tale of acceptance and growth with a satisfy­ing ending. A movie to brighten up the holiday season for anyone, “The Grinch” instills the holiday spirit into its viewers while keeping them jolly and bright.

Opinion: 4 techniques that will effectively increase your public speaking skills

Cuffing season: The pros and cons