Michael Bay’s “Transformers” franchise persists in the cin­ematic zeitgeist whether we like it or not. Each subsequent film seems to be even further on the metric scale of garbage, searing themselves into public memory. Whatever flaws exist have long been pointed out, but for the purposes of this article, let’s recap: robots, explosions, cleavage, rac­ism and sexism — five elements strung together by a cobweb of a plot; and yet, these movies continue to make money. There’s little to revisit in a “so-bad-it’s-good” kind of way, so this poses an interesting question. Does an undeni­ably awesome core concept justify a lack of substance? “Pacific Rim: Upris­ing,” directed by Steven DeKnight, provides an interesting answer.

Set 10 years after the events of the first film, the world is still recovering from the Kaiju War. Ex-Jaeger pilot Jake Pentacost (John Boyega) — the son of Idris Elba’s Marshal Pentecost from the first film — is a criminal, until he’s re­enlisted into the Pan-Pacific Defense Corps as an instructor when a new threat arises.

What exactly separates “Pacific Rim” from the likes of “Transformers?” Not just a cleaner ’80s dystopia aes­thetic and action set-pieces you can actually follow, but the otherwise life­less metal men are controlled by real people; the beating heart for audi­ences to connect with.

The first movie was directed by Guillermo Del Toro, a master of style, and it was relatively well received for its spectacle. But can anyone remember the first thing about the protagonist?

For the record, I don’t believe audi­ences who go to giant monster movies are expecting deep characterization or a thematically-rich plot. These films are about visual flair, not the consequenc­es of giant robots smashing through occupied buildings.

It’s easy to see why the first movie was so well received, so it’s weird that the sequel is getting blasted for doing the exact same thing.

Boyega as Jake is a big trade-up from the previous protagonist, and he re­mains charming throughout the mov­ie. His partner is the white-bread Ranger Nate Lambert (Scott Eastwood), who is training a new 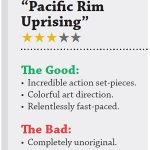 generation of Jaeger pilots. The only other notable characters are the scientists that were in the first film, played by Burn Gorman and Charlie Day. They remain the best part because they’re the only person­alities that don’t feel like they were de­signed in a lab.

Everything from the dialogue, to the story, to the action are all things people have seen a hundred times. The initial surprise that “Pacific Rim” didn’t completely suck may be influencing critical opinion of “Pacific Rim: Upris­ing” more than people realize. Everyone may be holding the original above the sequel because it was the first to provide an alternative to “Transformers.”

“Pacific Rim: Uprising” has the same city-scale cage matches, a quicker pace and takes itself even less seriously than the first film did. It’s willing to speed through deeper characterization be­cause it knows what the audience came for. The crowd-pleasing moments are certainly pleasing and it never slows down enough to get boring; however, there is almost no reason to care about what’s happening on screen. For this kind of movie, as long as it doesn’t go out of its way to insult its audience, maybe it’s ok.

Tacoma Film Festival: Calling all filmmakers, it’s not too late to submit!