Adaptations of Stephen King’s work often go on to become staples of pop culture, but “IT” holds a special place in the last generation’s schoolyard memories due to the 1990 miniseries of the same name. At the time, it was hailed as one of the scariest things a kid could ever see. I’m not entirely sure that was true, even then; not with Tim Curry’s hilariously memorable take on one of the central monster’s many forms, Pennywise the Clown. The overall quality was also debatable. Most tend to agree that the first half of the series that involved the core cast as children was better than when they returned as adults to finish off the monster for good. Needless to say, a lot was riding on the 2017 remake to live up to the bonkers source material; and on Bill Skarsgård to provide a legitimately terrifying Pennywise. The result is good, but not great.

I’ll start with what everyone wants to know: Is “IT” scary? Though marketed as an R-rated no-holds-barred horror event, it’s not very frightening if the individual viewer doesn’t jolt at the many standard jump scares this movie delivers on a conveyor belt.

The new adaptation of “IT” stars Jaeden Lieberher, Finn Wolfhard and Sophia Lillis as leading members of the Losers Club, a group of Derry, Maine misfits drawn together by monsters both human and trans dimensional. As children mysteriously go missing and no one seems to care, the Losers take it upon themselves to find whoever — or whatever — is responsible.

Scene after scene begins with one of the children witnessing a gruesome image and WHAM! There’s the clown! The pace moves at a good clip, up until the movie grinds to a halt at the end of the second act conflict and only picks up again at the climax. The only shenanigans that come close to delivering are the quieter ones near the beginning that allow tension to build rather than detonate prematurely.

An early moment with Wyatt Oleff ’s Stanley Uris and a certain painting gave me the creeps, but even those scenes and the monster itself are bogged down by lackluster CGI that could’ve and should’ve been accomplished with practical effects to give them palpable presence. They avoid being silly and the cinematography is fluidly shot at crooked angles to give things a sense of weirdness, but they never go beyond what’s simply serviceable. 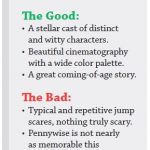 This is especially damaging because despite the cheese of the miniseries, Curry made up for it by having real dialogue with his prey. There are significantly less lines here for Skarsgård’s Pennywise to infuse an intelligent malevolence that the character requires, so if the disturbing imagery doesn’t entirely work on its own, neither does this more bestial portrayal.

It can still be an entertaining performance, but the audience should instead brace their stomachs for the human bullies and sexually abusive parents. Those characters elicit much more of a reaction.

What really saves this movie are the central cast of kids themselves, which earns the movie an apt comparison to one of Stephen King’s other great works, “Stand By Me.” Each of the Losers rock their roles, and their camaraderie is as natural as it would be for real friends. The film is certainly at its best when the focus is on their maturation. The directorial decision that moves them to 1989 as opposed to the 1950s capitalizes on the kids-on-bikes nostalgia that popularized “Stranger Things” in a big way. They even include the show’s own Finn Wolfhard as Richie, who steals every scene he’s in.

Like any adaptation, some of the more intricate details of the characters are left on the cutting room floor. “IT” readers will likely understand when it comes to certain chapters, but some of the main characters have their arcs reduced and their personalities made archetypical as a result.

Most of the overt racism inflicted against Jones’ Mike character and the other expository elements that made up his storyline are either absent or toned down. This goes hand-in-hand with the time period change. It’s hard to be tonally consistent when a serious scare followed by references to New Kids on the Block.

If one is willing to get invested with the characters, the movie’s faults can be overlooked, but not forgotten. There’s a better movie trying to get out and maybe we’ll get it when everyone returns for “IT: Chapter Two.”

Hopefully the adults will have at least half the charm their teenage counterparts did. As long as the sequel doesn’t remind us what the boy band scene was like in the late 1980s, it’s something to look forward too.