Marvel has been on top of the world lately — with an uproar of both superhero and villain flicks, the Marvel Universe is taking movie screens and box offices by storm. From “Avengers: Infinity Wars” to “Black Panther,” 2018 has had a fair amount of new releases, giving critics and audi­ences alike a fix to their obsessions with these characters. Along with the long list of heroes that audiences have fallen in love with, the misunderstood villains are growing in popularity and likeability. Think of the 2016 film “Deadpool” or its sequel “Deadpool 2,” both of which crushed box office sales. Why? Because audiences are empathizing with these villains due to their uncanny charm, cir­cumstances and backstory. Nowadays, it’s hard not to fall in love with the villains, and Venom is no different.

Without giving all the gory details away, “Venom” follows journalist Eddie Brock (Tom Hardy) who is writing an expose on mad scientist and founder of the Life Foundation, Carlton Drake (Riz Ahmed). Carlton is discovering and unleashing symbiotic life forms (what Venom is) in his lab, and Eddie is at­tacked by a symbiote while trying to expose him — finally introducing his transformation into Venom halfway through the film.

Venom is no stranger to the big screen, as he plays the villain in “Spider-Man 3” — a movie as equally as dull as this one. You would think that with today’s advanced technology and great­er ideas, “Venom” would be the best anti-hero movie yet, but this assumption was wrong. 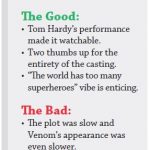 While “Venom” attempted to emulate the comedic superhero film formula seen in “Deadpool,” it just wasn’t as funny or interesting causing my attention to grav­itate elsewhere. The trailers made the movie look funny, but the chuckles were limited to the bare minimum. Also, the plot was entirely too slow. With Hardy as Venom not being revealed until about halfway through the film, the first half focuses on how big of a miserable lowlife Brock is. It was just sad, and I expected far more from the plot and the mislead­ing trailers.

These plot issues were paired with underwhelming special effects, making the film even more disappointing. Look­ing at the portrayal of the Venom char­acter in “Spider-Man 3” and other Mar­vel films such as “Black Panther,” “Venom” is pathetic in comparison. Yes, the film shows Eddie/Venom kill people, but there is hardly any blood shown, and the audience really only sees the shadows and silhouettes of people getting their head bit off. Venom should have been gorier and scary rather than a slight­ly-comedic anti-hero.

But hey, with all disappointments aside, there were some great parts to this movie. For instance, Tom Hardy truly played the best Eddie Brock imaginable. He was comical, charming and made the movie actually tolerable. There was also the aspect of a “super-villain” movie that was really enjoyable, and how easily the audience was able to empathize with Ed­die/Venom, despite him being the villain.

Regardless if you’re a fan of this movie or not, Marvel is going to keep mass-producing these films and making buckets of money from it. The ending — and for those patient enough to wait for it, the infamous mid-credit scene — of “Venom” implies a sequel in the near future. So let’s hope that they get it right the next time around.