“For sale: baby shoes, never worn” was something Ernest Hemingway supposedly wrote when he bet his friends he could compose a story in under ten words. The struggle of every writer is finding a concise voice of their own, and much of their early feedback often calls for removing unnecessary elements from a piece. These include background details or characters given too much focus with little purpose, deliberate padding of content and stylistic choices that are employed without satisfactory resolution. All of these can drag a narrative beyond the attention span of an audience. It is a sign of artistic finesse when a story makes every beat count and knows when to end.

This is probably what I appreciated most about Netflix’s newest show “End of the F***ing World.” The streaming service has a fine track record, but the bingeing format sometimes prioritizes quantity of episodes or run-time versus the actual quality of the series. Otherwise well-produced television like the Marvel exclusives and “Stranger Things” occupy more of a viewer’s time than needed. There are only eight episodes in “End of the F***ing World’s” first season, about 22 minutes each; and the show is all the better for it.

Alex Lawther plays 17-year-old psychopath James, and he wants to murder someone. He sets his sight on Alyssa (Jessica Barden) a rebellious ne’er-do-well who takes a liking to him. Mutual spite for suburban life bring these two teens together on a road trip to leave it all behind, and they learn a few things about human empathy and relationships along the way.

Lawther brings back the creepy stare he incorporated in “Black Mirror” to great effect, and it’s even scarier when he does crack a smile. To call Barden’s Alyssa uniquely portrayed would be putting it lightly. I initially didn’t like her character even after details of her past began to provide an explanation for her rebellion, but the raw energy brought to the table makes for an impressive performance. She storms through the world like a force of nature, bearing down upon the helpless masses between moments of calm. Everyone else does their part to elicit a wide range of emotions from the leads, be they sleazy or kind. 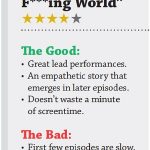 For a show with such fast pacing it’s ironic to note that the introductory episodes struggle to find their groove. James and Alyssa are given inner monologues to articulate their confused rationale, which is often contrasted by the blithe Tarantino-esque soundtrack and the dark comedy. This is all style, but before the story can move into the nitty-gritty of the characters’ disturbed mentalities, there isn’t much of a reason to watch besides morbid curiosity. It’s near the halfway point when a gruesome climax makes everything fall into place. From there the real plot unfolds at a refreshingly breakneck speed.

What really redeems the show from its first few episodes, which seem edgy for the sake of edginess, is the utter negation of its initial nihilism in the latter half. The world is harsh to those who are tired of it, but there are rays of sunshine that break through. Even if everyone else is against them, James and Alyssa have each other. The moments when they realize this are the most engaging for the viewer, making two very unlikable people almost sympathetic.

It ends on an ambiguous note in case another season is greenlit, but it’s still a complete story. I’d be satisfied if this is all we get. It sets a precedent for binge networks on how to approach a show, and proves that a good story need not be told in excess.

Dadaism and its resurgence through internet memes