Almost two years before “Wonder Woman” showed the world that the superhero blockbuster had been lacking a feminine touch, another heroine was busting skulls on the small screen. It wasn’t Supergirl, who consistently reminds women that they too can scrap with the big boys despite their gender. There’s nothing wrong with feminist messages in media, but a story is less engaging when it elects to exposit feminism rather than demonstrate it.

Unfortunately, the limited presentation and choreography of “Supergirl” necessitates that the virtues of being a female superhero be spoken. It would be infinitely more interesting to watch if viewers believed that the lead could throw a real punch, if she showed that she was capable rather than told us. Thankfully, a show like this does exist. The heroine being referred to — one that could kick Supergirl’s ass and take her lunch money — is Jessica Jones.

The character first appeared in “Alias #1,” a Marvel MAX imprint series. She lead a relatively tame superhero career as Jewel before running afoul of Zebediah Killgrave, the Purple Man. Marvel Television and Netflix chose to adapt this arc for the “Jessica Jones’” debut, with Krysten Ritter playing the lead.

Season one focuses on the trauma inflicted on Jessica by Killgrave (David Tennant), an electrifying avatar of male entitlement, and it’s a trauma still suffered by silent millions. Just as “Black Panther” tops Marvel films by basing its conflict in reality, “Jessica Jones’” provides an unprecedented exploration of sexual violence within a super powered context that elevates it above the other Marvel/Netflix outings.

The second season of “Jessica Jones” became available on International Women’s Day — fitting since each of the 13 episodes were directed by a different woman — just in time for a spring break binge party. Jessica got close enough to kill the Purple Man in the inaugural season finale, but instead of celebrating, she drinks to forget. The emergence of other “powered” people like her forces Jessica to confront the past and a mysterious murderer prowling the streets of New York City.

Some flaws in “Jessica Jones’” first season were that it’s much longer than necessary, and parallel storylines drag the pacing toward the end. Something viewers will notice going into season two is that these issues are much more present in the first few episodes. Multiple threads are introduced that don’t justify viewer interest until later; this is typical of the noir genre. Not everything needs to be revealed at the start, but without the looming presence of a clear antagonist (and an admitted lack of cool power shenanigans), it makes for a slower watch.

Similar to “The End of the F***ing World,” the real story kicks in at a midseason climax. The issues presented complicate season one’s focus on fighting just one monster by exposing the self-destructive 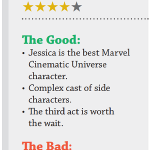 tendencies of every character in the show. Ritter as Jessica is easily the most charismatic of the utterly ignored Defenders, and she proves herself again to be one of the Marvel Cinematic Universe’s well casted characters. She’s strong without needing to say it, and at the same time keenly aware of the damage she causes to herself and her friends with her raw behavior.

Side characters are given similar arcs in keeping with the theme. Trish Walker (Rachael Taylor), the future superhero Hellcat, goes to great extremes trying to snuff out the feeling of helplessness she gets standing beside “powered” people. The wonderful Carrie-Ann Moss returns as the stiff lawyer Jeryn Hogarth, someone used to being in control. When it’s taken away, she doesn’t take long to reveal herself to be very comparable to Jessica. The stakes are much smaller, but they’re made more personal for everyone. No matter how hard they fight, they only seem to hurt themselves.

Though this definitely falls below the first season in terms of overall quality, “Jessica Jones” continues to push things in the right direction. Its best elements show the worth of the Marvel-Netflix experiment as a means of telling stories in a more complicated manor than a romp at the theater. Even if season two doesn’t do much to link itself to a wider continuity — even to other Netflix heroes — it doesn’t need to. It’s wholly satisfying as its own entity.

Hidden gems of the South Sound