“Altered Carbon” is a Net­flix adaptation of the Richard K. Morgan nov­el of the same name. Set 350 years in the future, a person’s consciousness can be uploaded into storage contain­ers called “stacks.” As long as the stack is kept intact, the person can live be­yond the expiration of their physical body. Death becomes little more than a temporary inconvenience. Two-hundred-fifty years since his body’s termination, political insurgent Takeshi Kovacs (Joel Kinnaman) is brought back to consciousness by the wealthy business mogul Laurens Ban­croft (James Purefoy) to solve his own murder.

The lukewarm critical response to this show is hardly surprising given the circumstances. The premise of “Al­tered Carbon” can be comfortably categorized as cyberpunk; combined with its incredible production design and grimy retro-neon aesthetic, it in­vites strong comparisons to “Blade Runner.” It’s difficult to articulate the impact this movie had on the industry to casual audiences given its bizarre journey from box office bomb to cult hit. Even still, it’s academically revered as an exhibition of cinematic art. In that sense it’s hard to top, and borrow­ing from it was sure to beget criticism — but that doesn’t mean “Altered Car­bon” is a rip-off.

There is not an android to be seen in the entire show. It instead explores the implications of technological im­mortality through various perspec­tives, from spiritual to pragmatic. The rich live in skyscrapers that tower above the masses below. They’re able to afford upgraded bodies for them­selves or even clones. As in the case of Bancroft, they can even go so far as to assure themselves virtual immortal­ity by backing up their consciousness via satellite.

The impoverished have to make do with what they have. A little girl who dies prematurely is fitted into an old lady, and a mother is inserted into the body of a man. Because death has be­come obsolete, some take advantage by torturing victims to death and then bringing them back over and over until they talk, or get away with murder be­cause the victim’s consciousness lives beyond the body. Other groups oppose resurrection altogether. Neo-Catholics protest outside of stack clinics and de­monize those who return from the dead. 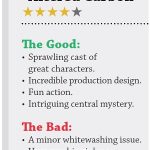 Besides narrative differences, there are other things that set the wonder­fully realized world of “Altered Carbon” apart from “Blade Runner.” For the duration of the investigation, Kovacs needs a place to stay. He checks in as a guest at The Raven, a themed hotel self-autonomously run by an artificial intelligence fashioned after Edgar Allan Poe (Chris Curtis). Aside from provid­ing technical assistance to Kovacs, Poe lightens up the grim proceedings with healthy dollops of gallows humor. The characters themselves are colorful per­sonalities and have interesting back­stories, but Poe is the standout.

The question of what people do for fun when they can’t die is also empha­sized, usually involving copious amounts of drugs, sex and violence. Critics argue that it’s gratuitous, but in a world where “Game of Thrones” ex­ists, mature viewers will barely blink. Another issue critics seem to have with “Altered Carbon” arises from its prem­ise: Takeshi Kovacs, born an Asian man, is put into the body of Kinnaman — a white guy. Easy target, but it’s a much less egregious example than cast­ing a white person in a role specifi­cally meant for someone of a different ethnicity. Kovacs’ backstory is gradu­ally revealed through various flash­backs of when he inhabited his original body, giving more than enough time to each of his avatars to satisfy the di­versity quota; barring the rest of the insanely diverse cast.

That’s not to say that these issues don’t exist. If you don’t like nudity or feel uncomfortable with the race swap, those are valid reasons for not tuning in, but you really ought to give “Altered Carbon” a chance to prove itself. It’s one of the coolest shows available right now. What else features a transracial chain smoking mercenary, high on every drug imaginable (and some made up), mowing down scores of goons with the help of Edgar Allan Poe? The action is amazing and the cinematography is a treat for the eyes. Catch it on the tube whenever possible.

Opinion: How to help vets better integrate into the civilian world

Washington’s most underrated and places to visit