Released back in 2012, “Dishonored” was a first-person action-adventure game that provided the player with a large variety of gameplay options to reach a designated target. Players could be stealthy and sneak past most of the enemies, or they could play the exact opposite and be a killing machine. That multitude of different possibilities gave “Dishonored” longevity by allowing players to choose their own way to play.

That freedom of choice is very much present in “Dishonored 2.” Many of the core gameplay elements remain the same, such as the silent crossbow and the loud and proud pistol. However, “Dishonored 2” adds in enough new material to make it more than just a reskin of “Dishonored.”

In “Dishonored” there were a number of different limitations placed on non-lethal playthroughs, such as the inability to utilize most lethal gear. Thankfully though, “Dishonored 2” adds in a few new mechanics which makes non-lethal playthroughs less limiting. Examples include choking someone after parrying their attack, stun mines and howling crossbow bolts — which distract and immobilize enemies.

Supernatural powers also make a return and remain largely unchanged. Throughout the story the player can collect runes that can be used to purchase or upgrade abilities. For example, players can purchase the ability to temporarily stop time. Bone charms can also be collected that passively affects the player with increased health or lower mana consumption. New to “Dishonored 2” is the ability to choose between two different characters — Corvo Attano and Emily Kaldwin — each of whom possess different abilities. Corvo’s abilities remain unchanged from the first game. However, Emily has an entirely different selection of powers. While Corvo can bend time to his will, Emily can create duplicates of herself, stun enemies and even turn into a beast-like shadow that can either knock out or kill enemies.

Gadgets and powers aside, the level-design is the true marvel. In each mission, the player is assigned a target to eliminate, through lethal or “nonlethal” means. The process of getting to that target is completely up to the player. For example, one mission has the player take a series of trolleys to a mansion where the target is located. By exploring the map, the player can find out that there is an alternative path to the mansion through a series of different plateaus. This, mixed in with the already-set gameplay mechanics, provides hours upon hours of replay value. 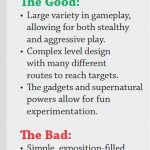 Another returning feature is the chaos meter, which increases every time the player kills something. Both high and low chaos have detrimental effects on gameplay. With high chaos, there are more guards in each mission, characters view the player in a negative light and the ending is negative. With low chaos — achieved by not killing individuals — there are no new guards, characters look at the player in a positive light and the ending is more positive.

Though the chaos mechanic has its perks, such as creating different scenarios depending on the player’s actions, it also severely limits player freedom. For example, non-lethal takedowns for targets seem more evil than actually killing them. For one non-lethal takedown, the player is given the option to fry the target’s brain, making them incompetent and docile. In another, the player is given the choice of trapping the target in a fake reality, causing them to lose touch with actual reality. These actions are required in order to get the good ending and to ensure that characters doesn’t view the player in a villainous light.

The story is also fairly similar to “Dishonored.” The main character is betrayed and has to go after each target to make things right again. Though the plot is different enough so as not to be considered a carbon copy, the narrative at times felt forced. The constant stream of exposition over the most simplistic moments in the game didn’t help, assuming players were too incompetent to discover elements of the plot from its setting alone.

Though there are issues with the narrative structure, the rest of the game is a blast to play. There is just so much to do and every second of it is pure entertainment.

Opinion: We still have a chance to dump Trump

Review: ‘Fantastic Beasts and Where to Find Them’