After the per-usual dismal start to the year for films, things are starting to look up with the wide release of American Sniper. Directed by the not-entirely-consistent yet talented Clint Eastwood, American Sniper is the semi-autobiographical story of Navy Seal sniper Chris Kyle, a legendary, yet controversial man who is credited with the most kills of any sniper in U.S. military history. It’s a far more interesting story than it might sound like on the surface.

After 9/11, an aimless rodeo cowboy named Chris Kyle is inspired to join the military and ends up serving as a sniper in the Navy Seals. After becoming a renowned sniper, he becomes obsessed with a deadly insurgent sniper named Mustafa, who proves difficult to catch. Meanwhile, his per­sonal life falls apart as the war consumes him even when he’s back home with his family.

After getting through a slow, backstory-heavy start that explains why Kyle joined the military, American Sniper mixes suspenseful action scenes and personal drama to considerable effect. The film as a whole is well-made; gritty, washed out visuals and thunderous sound effects and scoring making the battle sequences gripping to watch. Getting to see a sniper’s perspective on the battle­field is a great diversion from the on-the-ground battles we see in many similar films. The only thing that detracts from the visual and visceral impres­siveness of the film is the clearly fake explosions of CGI blood that paint the battlefield whenever Kyle or Mustafa take a shot.

Opinions vary about whether the real Chris Kyle was a hero or not, but the film version gives us very sympathetic and relatable character. East­wood’s Kyle is a complex, troubled man who tried to do what he thought was right and had to live with the consequences of his actions both at home and in the field. Bradley Cooper is simply fantastic as Kyle, proving again that he’s come a long way since his days playing Phil in the Hangover series. 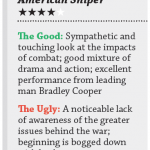 One of the film’s most impressive accomplish­ments is how it balances the war story with the more personal elements. You could make an entire film about either just Kyle’s military career or his home life, but American Sniper takes on both and handles it well. The relentless fighting and horrors that he witnesses in Iraq are contrasted with the slower paced scenes of Kyle struggling to live a normal life back home in between tours. The film gradually transitions into exploring PTSD and how it crippled Kyle’s relationship with his family. Whether it be Kyle watching his friends killed before his eyes or being unable to hear a drill in a car shop without flashing back to Iraq, American Sniper doesn’t shy away from the harder parts of its story.

Obviously, this is a very political film and it has sparked controversy among film critics over the content of the story and the politics behind it. It doesn’t condone the war as a whole, but it is told from a purely American viewpoint. A line is drawn between the Americans and the Iraqis, with the latter almost exclusively being a faceless enemy that Kyle and his companions must gun their way through to stay alive. Unlike the real Kyle though, who appears to have taken considerable pride in his kills, the film version struggles with his actions. His motivation for killing is saving the lives of his fellow soldiers, which keeps him from ever becom­ing a monstrous killer seeking personal glory or enjoyment All that said, it would have done well to take a page out of last year’s Lone Survivor and humanized the Iraqis more instead of depicting them as a group of “savages” (as both the film ver­sion and the real Kyle put it) with grenades and automatic rifles.

Even if the film can’t escape political implica­tions altogether, it is still an excellent war film. It’s not a nuanced portrayal of the intricacies of the Iraq War and what it was like on both sides; rath­er, it is a look at how the war wore down one soldier. It is violent and action-packed in some scenes and withdrawn and depressing in others. If the lack of greater awareness and context surrounding the Iraq war doesn’t bother you, American Sniper is an alternately intense and tragic story that is worth seeing.

A Night of Mischief, Magic, and Masquerade