Set in 1973, “Kong: Skull Island” takes place shortly after the Vietnam War. Newly built satellites, constructed by the Monarch Corporation, lead to the discovery of an island with unusual weather patterns. The Monarch Corporation then asks the United States government to fund an expedition to the island. This small expedition is led by Bill Randa (John Goodman), who is accompanied by an anti-war photographer Mason Weaver (Brie Larson) and a couple of military escorts, including Colonel Packard (Samuel L. Jackson).

Being a monster movie, things immediately go wrong for the small group after they drop a few bombs on the island to ensure its stability. Following this, they are met by the giant ape monster himself, King Kong. Kong quickly dispatches their helicopters in a beautifully chaotic matter. This leaves the group stranded, forced to traverse the island for a way out whilst surviving the inhabitants of the island — both human and monster.

Though this is a monster movie, it mainly focuses on the human characters — following much of the same formula as 2014’s “Godzilla.” This was somewhat of a disappointment, especially since Kong rarely makes an appearance because of the emphasis on other characters. He appears at the beginning, but after that, his appearances are limited to brief moments throughout the film. This will be a letdown for those who came to watch the movie just for King Kong.

This isn’t to say that there is no presence of monsters in the movie. There are the occasional monsters that appear throughout the island, such as the abyss lurking Skull Crawlers, which prove to be an obstacle for the human group. 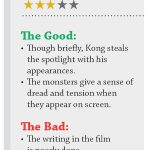 The lack of monster focus would be fine if it weren’t for the fact that I didn’t feel attached to the human characters. None of them left any impact on me nor did I care for them. This is mainly due to the writing of the film. An example of this is the poorly executed comedy by John C. Reilly’s character, Hank Marlow. In a film that is about surviving a dangerous island full of monsters, Marlow’s jokes just ruin the mood, such as when he introduces the group to a species of monster called The Skull Crawler. Marlow comments that he is not a fan of the name after saying it aloud, and the attempt at comedy just didn’t do it for me. Sometimes the jokes land, and sometimes they don’t — and when they don’t, they don’t.

The pacing in the film is also an issue. At times, I felt bored due to nothing going on. Some of the scenes would drag on for so long that I would lose attention and desire to continue watching.

Despite these issues with the writing and narrative, “Kong: Skull Island” managed to entertain me with the brief appearances of Kong and the other monsters. If you have the time or extra money, this film is worth at least one watch.