Once upon a time, horror was an art of the unnerving, leaving viewers with a lasting fear that kept them up at night. Unfortunately, after the 1980s, the genre began relying on jump scares and over-the-top gruesome imagery to hit viewers quick and hard, sadly causing the genre to suffer in both the box office and crit­ic reviews. However, it seems as though the classic idea of general disturbance and real fear has reared its head once again. “The Haunting of Hill House” demands the viewer’s attention with true trauma and fear — a necessary refresh­er on what horror is meant to be.

“The Haunting of Hill House” follows the lives and struggles of the five siblings of the Crain family, years after the ter­rifying events at Hill House. The show takes us through each of the characters’ individual experiences during their childhood at the house, each of which are equally as mortifying. These horrible experiences are depicted with gruesome detail that shows no mercy for the view­er and fills them with an intense feeling of dread right from the start.

From the first minute, each episode is a macabre work of art that boasts the crew’s cinematography skills and oozes with captivating story. The use of various camera angles holds the viewer in a con­stant state of fear even while there is little to be afraid of on-screen. Instead of rely­ing on the use of grotesque images being launched at the screen, creative camera angles create the suspense and dread necessary for a deep fear to grow as each episode unfolds. This technique makes it all the more terrifying when something does appear that the audience should be afraid of. When this happens, the physi­cal embodiment of what we might have imagined lurking in our basements or under our beds emerges, such as a mu­tilated crawling corpse. 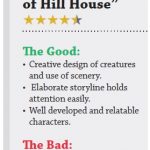 Each of the siblings from “Hill House” are accompanied by a beauti­fully developed backstory that perfectly explains their attitudes and personalities as adults. Through unique coping mech­anisms that developed from their haunt­ing encounters as children, the characters are easily understood and leave little to be questioned by the viewer. This effect is achieved by consistently revisiting their childhood via flashback scenes — the actors in which are remarkably matched to their adult counterparts — making the story much more believable and immersive. It may even be difficult to sympathize with one over another for the sole reason that each character is so easily understandable, despite each of their shortcomings.

While the story throughout the first season is full of depth, it does take some amount of investment. The scares may start from the very beginning, but view­ers must watch past at least the fifth episode to grasp a more complete un­derstanding of the featured family, as the first five episodes each focus on one of the five children. Although this slow escalation may be a bigger time com­mitment than most shows or films, sticking out these first few hours does give the viewer the benefit of a more developed narrative. Complete with unexpected twists and turns, one can easily find themselves hanging on the edge of their seats and cancelling their plans for the day.

There is no way to describe “The Haunting of Hill House” that doesn’t involve the words beautiful, entrancing or haunting (pun intended). In a time where horror has teetered on the edge of art or slop, Netflix may have just begun to push it back into the territory of art. Audiences will soon realize they were right to be afraid of the dark.

The 4 best ways to use your Thanksgiving leftovers