According to “Back to the Future 2,” Oct. 21, 2015 is when the future finally arrived. The sequel has always been my personal favorite in this franchise because I often wondered what the 2010s would be like as a child. It was fun seeing what the film’s predictions got right and what they got wrong. The continued reliance on fax machines and the double-tie has thankfully remained fictional, but there’s one thing the movie nails when Marty McFly walks into the cafe of the future: ’80s nostalgia.

The pervasiveness of this decade never ceases to amaze me. Half the films in theaters today are either reboots of ’80s franchises, works heavily inspired by them or simply set within the time period. When people look back on the 2010s for inspiration, what are they going to find but the reanimated corpse of a previous culture? Filmmakers who grew up in the 1980s are now setting out to capture their childhood, and at the rate they’re coming out it takes a special period piece to avoid the cliches that are starting to come with the aesthetic. “Stranger Things” is one such project.

The first season of “Stranger Things” grew popular through word of mouth rather than a saturated ad campaign, something nostalgic in and of itself. It was a genuine homage to the pop culture of yesteryear. The issues that plague any good show include replicating the success of prior chapters without repetition, missing the point of what made it compelling in the first place and making it bigger than it needs to be. How can it balance its well-worn setting with trope? I’m glad to say that “Stranger Things” season two is successful in avoiding these pitfalls, but it does stumble sometimes.

The story picks up a year after the events of the first season, and members of the core cast are trying to get back to their lives. Some have more trouble than others. With new threats from the “Upside-Down” dimension seeping back into their world, life in Hawkins, Indiana is about to get worse than it ever was before.

The ambitious expansion of a story necessitates the need for new elements to drive it forward, which sometimes pushes things that were prominent before to the sideline. This is a benefit for characters who weren’t rounded out the first time around, like Caleb Mclaughlin’s Lucas or Noah Schnapp’s Will. In fact, Will effectively replaces Mike — played by Finn Wolfhard — as the emotional core of the show. Having been stuck in the “Upside-Down” for most of the last season, it’s nice to see the little guy get a chance to shine as the story goes full horror. 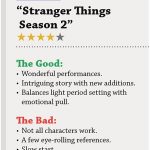 New additions are also brought in to give some of the aforementioned characters more of an emotional arc, which works terrifically for the ones we’ve already grown to care for. The inclusion of prime goonie, Sean Astin, provides the “everyman hero” charm I didn’t know this show needed. However, some additions like Sadie Sink’s tomboy, Max, and Dacre Montgomery’s Billy, her abusive older brother, are written two-dimensionally. Like the rest of the cast, their actors offer stellar performances, but they do little to justify their own presence outside of their contribution to the development of other characters.

Another thing that often strains under the weight of a larger story is how it is told. The first few episodes focus primarily on getting the audience up to speed, so it’s hard getting invested when things aren’t moving forward. It eventually picks up mid-season, and different combinations of partnering characters on parallel journeys are worth the wait. The show sometimes goes to great lengths to keep them separate with superficial reasoning, but some of the dynamics are so enjoyable to watch, I could easily ignore them.

The inevitable “totally ’80s!” references were something I was more afraid of. They do exist, especially in the beginning episodes, but all in all they act as more stylistic and visual callbacks that satisfy rather than invade. There’s some eye-rollers, but nothing that ultimately detracts from the experience.

“Stranger Things” season two was always in danger of failing the high expectations of fans who were pleasantly surprised by the first. Many shows do, but there’s a certain magic to this one. It could be the charming Spielbergian cast, the Stephen King tone, the synthwave soundtrack, maybe even the mullets — is it better than the first season? Maybe not, but regardless, it’s as radical, bodacious and gnarly as the decade from which it sprang.

I hope my profile didn’t make it on ‘Tinder Live’