When “Iron Man” made its debut in theaters 10 years ago, no one could have pre­dicted Marvel Studios would become the cultural phenomenon it is today. Every installment in its ongoing franchise has only built on its original success.

The last several films have been tak­ing turns Hulk smashing box office re­cords. Though they all work relatively well as standalone adventures, part of the appeal has always been the promise of a culminated payoff.

Ever since “The Avengers,” the villain Thanos and his quest to find all six Infin­ity Stones has been dangled onscreen like a carrot on a stick. This loose adaptation of one of Marvel’s most iconic comic book storylines is set to be the pinnacle of an entire decade of filmmaking. An undertaking of this scale is tantamount to a Herculean labor — so does “Aveng­ers: Infinity War” live up to the hype?

With so many moving parts, this movie doesn’t have time to ease the audience into the plot. It begins with the immediate introduction of Thanos as a tangible threat. His plan is simple: find all six Infinity Stones, place them into his Gauntlet and use them to wipe out half of all life in the universe to restore his notion of balance. Natu­rally, everyone else has a problem with that and bands together to stop Thanos and his Black Order.

There is no significant detour from this thread. Everyone is driven by a singular goal.

“Avengers: Infinity War” is the lon­gest film in the Marvel Cinematic Uni­verse, clocking in at around two hours and 40 minutes. A straightforward nar­rative makes it easier to sit through, especially when there’s 40 different char­acters running around. The downside is that not everyone gets more than a moment in the spotlight before the next action scene and individual arcs are given to whatever team a hero happens to be placed in.

The characterization may not be deep, but it works in this instance because au­diences are already well acquainted with the heroes. Not everyone needs more than a quick acknowledgement and sharp one-liners — and there are plenty of those. There are noted leaders of each team, of course, but they wisely fall under the shadow of this movie’s real MVP: Thanos, played by Josh Brolin.

Though Marvel typically nails its protagonists, it’s an oft-spoken criticism that their villains are either forgettable or straight copies of the hero. Thanos has done little else outside of glowering in his floating chair in the years building to his entrance, so it was absolutely im­perative that he be established well. And what do you know? He’s a total badass.

Like all great villains, he is the hero of his own story. Similar to Michael B. Jordan’s Killmonger in “Black Pan­ther,” Thanos believes what he’s doing is right. He stands in thematic contrast with the Avengers because he is will­ing to sacrifice everything for his goal where they cannot.

It’s rare when a performance shows through such heavy special effects. The secondary villains are not nearly as im­pressive in terms of visuals or character, but Brolin gives Thanos a humanity that’s both terrifying and oddly sympathetic. 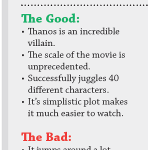 As the title suggests, this is indeed a war film and the battles are given ap­propriate scale. Compared to the direc­tors’ previous films, the Russo Brothers have dialed back their shaky-cam style. T

he nonstop action never gets boring, but with so many set pieces, some don’t pack as much of a punch as others. Be­cause the movie has to constantly cut between the separate groups, the flow of these sequences comes off janky until the third act.

However, the biggest problem is the ending. This is only part one of the end­game, which makes “Avengers: Infinity War” feel more like a mid-season fi­nale than a culmination, but its ending is one of the most chilling cliffhangers in recent memory.

Many of the starring actors’ contracts are coming to an end, providing the per­fect opportunity for their characters to meet a dramatic demise. The movie doesn’t pull any punches and every death initially shocks … until you remember this is a comic book universe. Anyone familiar with them knows that old char­acters are constantly resurrected. Given the ones chosen for the chopping block, it’s painfully obvious at least some won’t be permanent. It’s disappointing that even with a threat that spans the cosmos, the stakes remain superficial.

This inevitability doesn’t detract much from “Avengers: Infinity War.” The film is a massive achievement. It’s not the best in the Marvel Cine­matic Universe, but it’s undeniably impressive that a project of this mag­nitude actually came out good. It’s a cinematic experience the likes of which has never been seen before and likely won’t be made again for a long time — and it’s still not over. If you had plans this weekend, drop ’em. You’ve got a movie to watch.

Fun events to check out this month