Firewatch is a bad love story.

Created by indie developer Cam­po Santo, Firewatch is one of those walky-talky, not so much touchy-feely, games. You play as Henry, the new lookout for the Two Forks region of Shoshone National Forest. The game takes place in the summer of 1989 and sees Henry traipsing all around Two Forks, maintaining the wilder­ness and stomping out still-burning campfires. All the while talking with his superior, Delilah, over the radio.

Wait, have I not explained that “bad love story” part yet? That’s kind of how it feels to play Firewatch. The intro, where you learn via a text ad­venture of sorts how Henry met his wife Julia, who is suffering from early onset Alzheimer’s, is complete­ly disconnected from the main nar­rative of the game.

Firewatch tries to make something out of Henry’s motivations for fleeing from his marriage into the wild, but it begs the question, “If this is a story about Julia and Henry, then why is she barely in it?” Indeed, the plot cen­ters upon Delilah and Henry’s dy­namic in Two Forks for its whole five hours of exposition. You speak to Delilah through three-option dia­logue trees which, while well written, seem a pointless play to current trends, as choice has no role in the plot.

Furthermore, Firewatch does that terrible thing of having a really intri­cate first few missions with tons of little details and then just… stopping. Like it ran out of creative gas and had to switch to the most lethargic energy imaginable.

There’s a derogatory term in gam­ing that is nonetheless useful in de­scribing games like Firewatch: the “walking simulator.” It means that a game’s interactive portion consists primarily of walking, the implication being that the developer, in this case Campo Santo, was not equipped to create anything more involved. Fire­watch is undeniably a “walking simu­lator.” However, it cleverly subverts this trope by pairing it with the nar­rative. As a lookout, Henry is mostly being told by Delilah to go to a loca­tion on the map. This walking is liv­ened up by an intuitive map and compass system the player uses to navigate the world. This, combined with incidental other items like a flashlight and pulaski (an axe), creates a traversal system which, while enjoy­able, is underused and grows old by the end of the game. 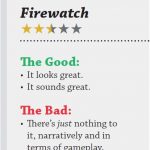 The biggest selling point of Fire­watch is probably its game world. Two Forks’ waterways, rocky outcroppings, and foliage are rendered in bold, emo­tional colors without oversimplifying away the world’s details. It can’t be understated how beautiful this Wyo­ming wilderness, as interpreted by artist Olly Moss, can be. The time of day changes through Firewatch, giving ample opportunity for the player to appreciate its naturalistic lighting.

Complementing its visuals, Fire­watch is expertly voice acted. It’s mostly Cissy Jones as Delilah and Rich Sommer, who plays Henry, for the duration, but they both provide great, natural-feeling performances. It hurts a bit that Henry as a character feels so very default, but no more than the confused plot.

The much more damaging aspect of Firewatch’s presentation is that it literally can’t put a face to the name. Like many walking simulators before it, Firewatch never shows other char­acters talking or even just standing there. Naturally this undercuts the drama as, say, when you’re sent to find two drunk teenagers, you can expect to find their campsite as empty as everywhere else in Two Forks.

At its best Firewatch is inoffensive, while at its worst it is still inoffensive. It’s pleasant but forgettable, and only ever going to be notable in reference to Campo Santo’s next—and hope­fully more ambitious—work.

I really wanted to like Firewatch and now I’m having a hard time even staying upset at it for its missed po­tential. It was just such a level experi­ence; $20, five hours, and some nice looking trees.