Directed by F. Gary Grey, “The Fate of the Furious” is the eighth film in the “Fast and the Furious” franchise. It follows Dominic Toretto (Vin Diesel) after he splits up from his team of mercenaries and begins to work with a mysterious woman known as Cipher (Charlize Theron). Both Dominic’s former team and federal agents must then track him down to find Cipher and to figure out why he is working with her.

“Fate of the Furious” is an exciting ride from beginning to end. Like the previous films in the franchise, the latest installment is absurd in nature. Everything in the movie is downright silly. Cipher is an antagonizing and threatening villain. She is secretive, clever and controls things from the background, yet she falls under every stereotype imaginable for a spy villain, causing her to be less than memorable.

The types of situations the characters find themselves in are also ridiculous in nature. While Dom’s team searches for Cipher, for example, there is a point where she hacks into a computer mainframe and manages to gain control over hundreds of cars to send after the team. The following scene is a thrilling, chaotic sequence of cars chasing them in all different matters, with some even falling from the sky in an attempt to crush the crew. 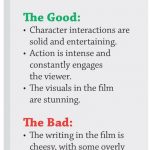 Though it is absurd, it is also brilliant in its random nature. “Fate of the Furious” is not to be taken seriously. The writing is silly, but the film manages to succeed because the directors know this and run with it. It doesn’t try to be serious, but rather, embraces the goofiness of the world — such as when one of the characters uses a car door as an improvised snowboard. A moviegoer who is expecting a serious, thought provoking film will be sourly disappointed with this aspect of “Fate and the Furious.”

One of the more positive aspects of the movie is its characters. Chemistry between Ian Shaw (Jason Statham) and Luke Hobbs (Dwayne Johnson) is by far the most pleasing part of the film. Whenever Statham or Johnson are on screen, they steal the spotlight mostly due to their overt display of how much they hate each other. The two of them being locked up in the same prison, forced to cooperate to survive and eventually break out definitely makes for a funny situation.

“Fate of the Furious” is an absurd film. It has cheesy writing and characters. Despite these negatives, it manages to keep viewers’ attention with its action. If you are someone who doesn’t mind mindless flicks or are a fan of the previous movies, then chances are you will enjoy this film.

Review: ‘The Neon Demon’ — the ending is a saving grace