Wherever the money flows, the Hollywood studios are never far behind, hoping to catch a nibble from a big fish. If a franchise can be milked by connecting it to a shared universe, why not cast a line? If millions of people play video games every day, why not hook audiences on an adaptation of a favorite pastime? It makes sense from an executive perspective, but unfortunately, some are in such a hurry to catch up to the sweet salmon that they forget to bring the fishing poles.

A cinematic universe requires individually well-made films that can gradually stack up on top of one another, not whatever the hell Sony’s “Spider-Verse” was supposed to be. This flop and others like it are important for showing that tapping into trends doesn’t guarantee success — but don’t hold out hope that Hollywood has learned from their mistakes. For instance, they’ve been making video game movies since 1991. Though not one has ever earned a “Certified Fresh” label, about 60 such projects are currently in development, and their latest is “Tomb Raider.”

Loosely based off the 2013 video game reboot, this iteration of Lara Croft (Alicia Vikander) follows a trail of clues to a long-lost island in search of her missing father. The island’s dangers will test her endurance, and its mysteries will lead her to her true calling.

There are a few reasons video game movies almost never stick, the biggest being the nature of the medium. Most games take an extended amount of time to beat, so the plot can unfold more intricately than in a two-hour movie. Players can move the action at their own pace and maintain a sense of agency, where a film takes the controller away. Assuming the game is good enough to be adapted in the first place, why bother watching something that’s inherently worse than the more interactive source material? “Tomb Raider” doesn’t escape these problems, and the toll plot compression takes on the script is irritating and even infuriating.

Chief victim of this compacting is Vikander as Lara Croft, and her characterization. The Swedish actress proved herself in “Ex Machina,” and for moments in “Tomb Raider” you can buy Lara as a driven person — not a caricature for prepubescent boys. This layering attempt is undermined by the poorly written motivations she’s given. She goes off to the mysterious island where her father went looking for an ancient tomb, a father that would scamper off throughout her childhood on such adventures under the guise of “business trips.” It doesn’t make sense that seven years after he seemingly disappeared for good, Lara would care enough to track him down.

Lara’s not played as someone who resents her father for leaving her, but needs to know why. Her actions come from a place of love and loyalty. If Vikander’s emotionally pure performance was allowed to carry the film without needless complications, it would’ve made every other inconsistency much more tolerable. Instead, it culminates into a creative decision that stops the movie dead, and the pacing never recovers. Even worse, Lara gets relegated to a cooperative position rather than an independent one — the last thing a movie claiming to have a strong female protagonist wants to do. 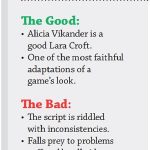 Other characters worth noting are alcoholic sea captain Lu Ren (Daniel Wu), whose father also disappeared, and the villain Mathias Vogel (Walton Goggins), a father who left his family looking for the tomb. This thematic tie-in with the protagonist’s goal is surprisingly poignant, but these characters become underutilized or completely sidelined by the plot, and fail to bring things full circle.

The film certainly looks like the game whenever Lara wrestles in mud or bounces through the jungle, even if it doesn’t exactly invoke the feeling of playing it. However, there are moments of video game ridiculousness. Lara shrugs off a wound she would’ve quickly bled to death from in real life — particularly bad given the film’s desire to be “grounded.” The movie ends up feeling like watching a buddy play the game while you sit awkwardly behind them. Props for trying, “Tomb Raider.” That’s more than I can say about many others of its kind.

The ultimate takeaway of this movie is wasted potential. There is a good story trying to get out of this jungle of a script, but several serious missteps render it dull and boring. Say what you will about the stupid Angelina Jolie movies. They embraced the craziness and will forever be remembered. This one was forgotten upon leaving the theater. Sorry, Hollywood. The big fish got away again.

Tacoma Comedy Club’s The Dope Show is a must-see