A documentary, directed by Brent Braum, Finding Noah is an adventurous story of searching for the legendary Noah’s Ark. Through this two hour ad­venture, you will travel with a group of archeologists to the believed final resting place of Noah’s Ark, the Turkish moun­tain Ararat. There you see them experi­ence hardships and other various things. But most importantly, you see their determination as they search for this mysterious ship.

For those of you who don’t know, Noah’s Ark is a ship created by a man named Noah. He created this ship di­rected by God to house two of every species. After the ship’s completion, the world began to flood, killing all life, leav­ing Noah’s Ark as the world’s last salva­tion.

This documentary focuses on more than just finding Noah’s Ark. It’s the journey of discovering the past, and the documentary does an excellent job of setting this up by showcasing different discoveries done by people throughout time. One example of this is archeologists finding the Incan city, Machu Picchu. The significance of this scene is supposed to show that everything begins as myths, and people prove these myths exist. Af­ter receiving eye witness testimonies and past documents that lead people into believing that the legendary Noah’s Ark is in the Turkish mountain of Ararat, it begins to introduce all the archeologists involved with this expedition.

Each archeologist introduced had a different motive for finding the Ark. Some wanted to find it to better under­stand themselves and their religion, while others wanted to prove its exis­tence, because a discovery of this mag­nitude would change how people viewed the world. One of the archeologists made a comment saying how, if they found the Ark, it would prove God had interfered with the world, and knowing that “would be terrifying.” Such a discovery would question science and put into perspective what we really know about life. 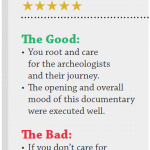 The way the documentary intro­duced each archeologist was great. Since each one introduces their motivation for finding the Ark and give their personal feeling regarding the matter, you really want them to succeed. You don’t want to see their hard work go to waste. This is made more apparent as they make their way up the mountain and deal with various obstacles that interfere with their progress. For example, one of the crew­men gets injured and a helicopter has to go and pick them up. However, the situ­ation near the mountain is not politi­cally stable. There are different political factions surrounding the mountain and the threat of being captured or killed is possible. So sending a helicopter up the mountain would create a risk of that helicopter being shot down by the war­ring faction.

Not only do the archeologists have to deal with that but they also have to deal with the various changes to the weather. One hundred mile winds, heavy snow, poor visibility—all these factors make their journey even more difficult. But these guys never give up. That’s what is so motivating. This group had to deal with so much going against them and yet, they still had the motivation to go forward. And the chance of them suc­ceeding is very slim as well. They climbed the mountain multiple times throughout the years and still were even more de­termined with each climb. By the end, you really don’t mind if they accom­plished their goal because it didn’t re­ally matter. The ending was not what really mattered but the journey.

In the end, this documentary is a must watch and has a lesson everyone can learn from. A lesson in which it’s the journey that matters, and not the desti­nation.