In this gilded age of shared universes, Marvel has set the bar for building a massive franchise piece by piece. Every studio has wanted a part of that cash cow for years, but no one has yet to replicate that kind of success. Sony’s “Amazing Spider-Man” and Universal Studio’s “Dark Universe” franchises tried so hard to set up crossovers, but died before any progress was made. It turns out trying to cram in future storylines or Easter eggs into one film instead of unfolding at a natural pace makes for an unsatisfactory experience — or, sometimes, a downright offensive one. Those terms best describe my perception of DC’s answer to “The Avengers,” but discussing their latest release, “Justice League,” requires mention of the steps taken to get there.

With the blithe exception of “Wonder Woman,” every film in the DC Cinematic Universe has been a confounding disappointment. I’ve found that assessment often ridiculed online as biased Marvel propaganda (I certainly could use the bribe money). I want to like these films, but before I get into why they are terrible movies regardless, I have to address the DC fan in me’s revulsion at the mishandling of the source material. It’s made particularly egregious because Superman and his ilk are classic characters comparable to the Olympian gods of myth. Reinterpretation is fine, but why make a movie about these characters at all if they will only be bastardized?

This cultural sheen rubs off on the DCEU films helmed by Zack Snyder, who, like George Lucas or Tommy Wiseau, are visionaries that aren’t able to move the vision from their heads to the screen on their own. What should’ve been an epic reminder of why DC heroes are so timeless became pretentious and sloppy, with some of the most asinine storytelling I’ve ever seen in a big budget Hollywood franchise. It’s cool seeing Henry Cavill’s Superman flying through a bunch of buildings, before you remember he’s probably killing thousands of people in the process.

“Man of Steel” was at least coherent, even if — in my agitated opinion — it spits on the character of Superman. “Batman V Superman” strips him of any layers, woefully miscast Jesse Eisenberg as Lex Luthor and was haphazardly edited together, “Martha!” aside. I’m not even bothering with “Suicide Squad.” “Wonder Woman” was perhaps a sign DC was finally getting its act together for the first onscreen appearance of its headliner team, but it was not to be, and this time, it will cost them. “Justice League” has had the lowest opening in the franchise, making it both a critical and financial failure.

Threatened by the return of the alien conqueror, Steppenwolf, Wonder Woman and Batman must assemble a team of metahumans strong enough to stop him from using the Mother Boxes — powerful doomsday weapons when combined — to end the world.

I usually begin reviews by first mentioning the positives of a film, and there are a few here. Zack Snyder had to leave mid-production due to personal tragedy (not the positive), and “Avengers” director Joss Whedon was brought in to complete filming and maybe lighten up the depressing tone of the franchise. The “Justice League” we end up with is an entertaining enough collection of heroes. Ben Affleck and Gal Gadot as Batman and Wonder Woman, respectively, continue to deliver good performances regardless of the poor material. Unestablished newcomers have less screen time to endear themselves. Ezra Miller’s Flash, Jason Momoa’s Aquaman and Ray Fisher’s Cyborg all manage as likeable characters, but some are more developed than others. Some aren’t developed at all, and that’s where the positives end.

Telling a story assuming the audience has done their homework is becoming a common trend in superhero films. The backstories for each character, even if this is their first appearance on-screen, are glossed over because execs are sure you’ve heard of them. Steppenwolf, played by Ciarán Hinds, will 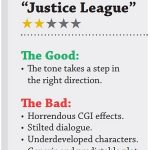 casually drop the name “Darkseid” like it’s supposed to mean something to general audiences. Speaking of underdeveloped, Steppenwolf — who got lost on his way to the “Warcraft” set — is the most cookie cutter villain to have ever come out of these movies. His motivation is “Revenge!” and he is single-minded in his goal, serving as little more than a target for the heroes.

This also extends to the expected resurrection of Superman — shocker, he’s in “Justice League” — who is suddenly a beacon of hope the world needs instead of the divisive figure in the last films. A quick five minute trip to Kansas does wonders for rediscovering purpose and a brighter costume, it seems. I’d argue they almost succeed in making him a character to root for, if they’d only give him his red underwear and better dialogue. Caville’s mustache had to be removed with special effects, which gives his face an uncanny valley feeling to it. Then again, Steppenwolf and his armies of parademons are made up entirely of CGI, which makes every cluttered action scene feel like a video game.

Warner Bros. stands to lose millions from “Justice League’s” current box office returns and frankly, I think they deserve it. If I feel like I can make a better DC movie than them, something needs to change.