Mainstream media has a very back and forth relationship with sex. In some cases, it’s used as a gratuitous selling point, and in others it’s ignored entirely. Big-budget franchises rarely have anything meaningful to say about the topic, not even those that revolve around it. Take the wildly popular series of books, Fifty Shades. Anasta­sia Steele is a doe-eyed girl fresh out of college who falls for billionaire ex­ecutive, Christian Grey, and becomes his bondage “submissive.”

Had the original manuscript not been “Twilight” fanfiction, perhaps the books could’ve been an open fo­rum on consensual sexual “handling” as a more acceptable practice. Had the first two films allowed themselves to grow beyond the asinine source material, maybe the third wouldn’t have been such torture to sit through. The only good thing about “Fifty Shades Freed” is that it’s the last film in the series.

Anastasia (Dakota Johnson) and her new husband Christian (Jamie Dornan) are ready to spend the rest of their lives having sex in various locales, but malevolent figures from their past and new challenges will test the strength of their bond. Will they have their happy ending?

The second thing audiences may groan at is this movie’s failure to maintain continuity with itself. There are enough instances to fill a filing cabinet, but some of the most notable include: Ana calling her husband “honorable” despite his tantrums; Ana going with her husband and some friends on a weekend getaway, even though she had just told him she can’t go away every weekend when she has a job; Jack’s bail bond for attempted kidnapping later in the movie being set at $500,000, and him showing up again without any expla­nation as to where he got the money — little things like that. 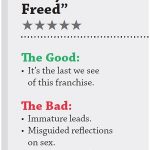 There is a third thing audiences may finally hang themselves over. Ana and Christian wait until after they’re married to ask each other if they’d ever consider having children. There’s a fourth thing. Ana suddenly forgets to take her contraception shots and sends Christian into the arms of a former mistress when she tells him she’s pregnant, then locks herself in the sex dungeon to sleep. A fifth thing: pulling into a parking lot after a car chase, Ana and Christian forget their lives are possibly in danger and have sex right then and there. Christian storms into Ana’s workplace when his wife doesn’t immediately respond to his goddamn emails. Christian denies Ana sexual satisfaction and whines that he feels the same frustration when she doesn’t obey.

Christian’s justification for his pet­tiness is his rough childhood, but it’s hard to feel sorry for a billionaire who takes three vacations a week and grabs at Ana’s ass every chance he gets. She has every reason to leave him — but then there would be no more buttplugs and expensive dresses!

“Fifty Shades Freed” is a cynical advertisement for luxurious lifestyles that insults its audience. It’s not often a movie earns zero stars, but this one does — not for the inconsistencies, not for the uneven story, but because it actually made me angry; and that’s my biggest turn-off.

Opinion: Elon Musk is the future