For every “Halloween” and “Get Out,” there will always be a “Jason X” or “Zombie Strippers.”

Horror, by nature, is the most dif­ficult genre to put on screen. Trying to elicit a state of panic from audi­ences is already impossible because the audience knows it’s not real. It then falls to the director to create characters we can identify with enough to shriek when things go bump in the night. When the director doesn’t do their job, you get a B-movie and it becomes an entirely different kind of horror.

“Truth or Dare” stars Lucy Hale as Olivia Barron, who travels to Mexico for spring break with a core group of no-name friends. There they meet a man at the bar who knows a great spot for a friendly game of truth or dare, which just happens to be at an aban­doned monastery. Nothing strange there. But when Olivia returns to school, the game continues. If you don’t tell the truth when asked, you die. If you fail to complete a dare, you die.

The premise might be your first tip-off that this isn’t going to be a par­ticularly well-crafted horror. It’s some­thing of a running joke that the pro­tagonists of these films do the exact opposite of what any actual person would do. “Evil Dead” is a franchise founded on that concept. By having characters consistently make piss-poor decisions, it eliminates any kind of connection with a reasonably intelli­gent audience. When the “horror” actually hits someone, it becomes one of many instances where you’re check­ing your watch. Typical B-movies go the extra mile that makes you laugh at the character’s stupidity. “Truth or Dare” has all the hallmarks of such a film, without the cheesy charm that usually goes with it.

When a cast of young adults wan­der through a haunted forest or find a satanic burial site, there’s usually a designated “jerk” that dies first so au­diences get a taste without losing their favorite character. In “Truth or Dare,” however, almost every member of the gang is extremely unlikable. 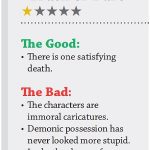 despite his frankness about his junk being com­parable to a pool cue. Spoiler: When he is dared by the demon to show ev­eryone what’s going on down there, Ronnie refuses and then slips on an eight-ball and snaps his neck. It’s by far the most satisfying death in the film, and interests viewers enough to keep watching as the killings go on, but the movie never takes advantage of the possibilities. The rest of the cast either cheats on their boyfriends, sells pre­scription drugs or harbors awfully bor­ing secrets the demon wants brought to light.

The whole thing is completely for­gettable outside of one creative se­quence, but it’s notable for its presenta­tion. One would think that with such a ridiculous-looking facial stretch rep­resenting demonic possession, this film would exercise some form of comedic awareness. Nothing that happens is played for irony and the absurdity con­tinues to escalate from the beginning. When the source of the evil is identified and Olivia tries to stop it, what follows is an ending so bizarre it’s difficult to describe. Besides going against every­thing we know about the protagonist by that point, it watches like a smug boardroom pitch enamored with its own genius, unaware the listeners had jumped from the balcony window. Save yourself from this Satan spawn of a movie and go see something else.

Alma Mater: A place for foodies and artists alike

‘Clybourne Park’ sure to make you laugh and think