When a new Star Wars tril­ogy was announced by Disney soon after their acquisition of Lucasfilm, audiences were understandably hesitant at the prospect. The prequels tried and failed to capture the holy glow of the “originals.” Past mistakes didn’t stop “Star Wars: Episode VII – The Force Awakens” from being one of the most anticipated movies of all time; and boy, did it pay off for Disney.

Although I personally thought “The Force Awakens” was a decent movie overall, many were polarized by its adherence to familiar plot points. When folks first caught trail­ers for “Star Wars: Episode VIII – The Last Jedi” — written and directed by Rian Johnson — and saw what ap­peared to be AT-AT Walkers, it was natural to assume it would be an­other retread.

Intriguing mysteries introduced in “The Force Awakens” didn’t help. With the lineage of the protagonist Rey (played by Daisy Ridley) left am­biguous, many expected moments unto I am your father/brother/neph­ew’s cousin’s former roommate. There’s also a lot of backstory be­tween the final moments of “Return of the Jedi” and “The Force Awakens” waiting to be revealed. The Star Wars fandom worked overtime filling in the gaps themselves until “The Last Jedi” would put their theories to bed with definitive canon. Then there was the earnest return of Mark Hamill as the legendary Luke Skywalker.

How he factored into the narrative was just as up in the air as everything else, especially since Hamill himself has said in interviews that he ini­tially disagreed with the direction Johnson chose for his character. This turned what was already a possibil­ity into an inevitability. People were going to be disappointed, and just look at the audience score on Rotten Tomatoes: 51 percent as of writing this, lower than “Star Wars: Episode I – The Phantom Menace.” Across the internet, “true fans” are blasting “The Last Jedi.” It was a middle finger to their childhoods; it’s ruined the fran­chise. In short, it confirmed what they’ve been saying all along: the new trilogy is trash.

The accusation that this movie “ruins” Star Wars entails that the opinionator has a very rigid idea of what Star Wars should be. This has always been true of the franchise’s notoriously authoritarian fan base. I personally have an opinion on what Star Wars is because of how much it meant to me as a boy. Johnson was well aware of all these conflicting opinions. Though he claims other­wise, the result seems almost written as a direct response to these lofty expectations held by the audience. More than any other film in the se­ries, “The Last Jedi” is the director’s individual interpretation of what Star Wars is all about.

The space allotted to me for ar­ticles isn’t enough to judge that vision alongside the movie itself in the same piece, so I will save my thoughts on franchise fundamentals for next week. This review will focus on the composition of “The Last Jedi.” The story picks up moments after the end of “The Force Awakens.” The Resis­tance is on the run as the First Order moves to consolidate their military might across the galaxy. Rey has fi­nally tracked down Luke Skywalker and now faces the difficult task of convincing him to rejoin the fight.

On a technical level, this film is Oscar worthy. The cinematography is gorgeous, with sweeping shots of creatively different vistas. The soundtrack has greatly improved. Practical effects as opposed to CGI were utilized to a satisfying degree, making this galaxy feel more lived in, and the set design is incredible. Some scenes are guaranteed to make your jaw drop.

The performances of the cast — of which there are too many to individu­ally name — are as good as the writing allows. There was never any doubt Hamill would rock his role, but his prestige is matched by Ridley, Adam Driver as Kylo Ren/Ben Solo, and Car­rie Fisher as General Leia Organa. In wake of her untimely death, most of Fisher’s scenes take on an almost pro­phetic double-meaning that I wasn’t emotionally ready for. Others were probably a bit sillier than intended.

Things get murky where the nar­rative is concerned. First off, this is not a remake of “Empire Strikes Back.” There are callbacks, but no­where near the levels that “The Force Awakens” reached. My issue is how it breaks off into many tangents that have to fight for their screen time, to the detriment of others. Kylo Ren/Ben Solo is reeling from murdering his own father while Rey is trying to crack why 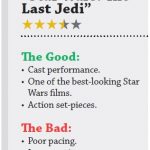 Skywalker went into hid­ing. It’s terrific stuff until the movie says “Meanwhile…” and grinds po­tentially interesting plot progressions to a halt. It unfolds at a very fast pace to pack everything in, but story threads and whole characters could’ve and should’ve been trimmed or cut out entirely to let others truly shine.

On top of Johnson’s own creative expansions to the mythology, the mysteries offered in “The Force Awakens” are given some kind of an answer in “The Last Jedi.” They are not treated so much as bombshell reveals as they are simply a different narrative direction than most were probably expecting. They serve the message Johnson is trying to get across — even if I would’ve changed a few minor things myself — which helps “The Last Jedi” become one of the more thematically rich films in the franchise. Whether or not it reg­isters as a true Star Wars movie is saved for next week.

The abysmal pacing of the film doesn’t get in the way as much as you would think since you don’t have to wait long between the moments you pay to see. “The Last Jedi” is a lot of fun for the casual filmgoer, even if it doesn’t always justify its two and a half hour runtime. The spectacle of seeing Luke Skywalker again is worth the price of admission alone. Despite what you may have heard from the horrified fanboy or the generous critic, this film is neither terrible nor a masterpiece. It’s an entertaining enough sci-fi romp with choppy sto­rytelling that keeps it from true great­ness, but enough Force to keep the franchise strong.