The Hunger Games are inescap­able. The popular young adult series sold millions of books, and when it made the jump to the big screen, it raked in the cash, with the first three movies raking in over a bil­lion dollars. As the last in the series, The Hunger Games: Mockingjay – Part 2 has a lot to live up to. For the most part, it does a great job of it, satisfy­ingly ending a beloved series.

The film picks up where it left off with Katniss, played by Jennifer Law­rence, getting a checkup in the infir­mary. Lawrence’s performance is at the heart of the series, and this install­ment is no different. She convinc­ingly portrays Katniss’s struggles and shows the character to be strong but vulnerable, a kickass heroine with a heart of gold, all without coming across as a stereotype.

Katniss is suffering from physical injuries, but the main conflict is emo­tional, as Peeta, played by Josh Hutch­erson, is still brainwashed against her. This conflict continues to play out across the course of the film, compli­cating their relationship.

Returning as the third member of the love triangle is Liam Hemsworth as Gale, the supportive friend from Katniss’s childhood who now fights with the rebellion. By the end of the movie, Katniss makes her choice be­tween the two, and it’s not a surprise. Maybe in the books, it wasn’t as obvi­ous who she’d end up with, but in the movies, it was pretty clear. Katniss’s love triangle ended up being predict­able and unsuspenseful.

However, that wasn’t true for most of the film. Much of the film was excit­ing and suspenseful, especially the big action scenes. When Katniss and her comp 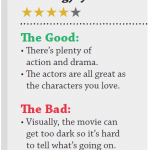 anions are invading the capital, you never know what’s lurking around every corner, what danger is only steps away. As a series, The Hunger Games is unafraid to kill its characters, even fan-favorites, so there’s always a real risk felt in its fight scenes. More char­acters do die in this film, so it’s not a false suspense—be prepared for emo­tionally impactful deaths.

The emotions in the film are pow­erful, and so the emotional scenes can pack as much of a punch as the fight scenes. It feels more painful when Peeta speaks cruelly to Katniss than when Katniss gets shot in the chest. It’s thanks to the compelling, well-acted characters, that these scenes have such a strong impact. The audi­ence can’t help but care about what happens to them in the end.

It’s toward the end that the film starts to lag. Once the main goals are accomplished, it feels like the movie should be over, and yet there are still loose ends to be tied, especially involv­ing the love triangle. For a series with so much action, it’s a little strange to end on such a quiet note. Is it a bad ending? No. Is it an epic climax? Again, no. You’re not going to leave the film disappointed, but you’re not going to leave all pumped up either.

Overall, The Hunger Games: Mock­ingjay – Part 2 is a satisfying conclu­sion to a popular series. It gives the audience the closure it needs, while providing the characters, action, and suspense it craves. Check it out in theaters—it’s worth your time and money.

What’s Wrong With Being a Narcissist?

5 Things You Might Not Have Known About the Peanuts Franchise