October is the height of horror movie season, and Crimson Peak has been well antici­pated. Trailers for the movie featured praise from the king of horror stories himself, Stephen King. With noted director Guillermo del Toro leading the movie, and a cast featuring Mia Wasikowska, Tom Hiddleston, and Jes­sica Chastain, Crimson Peak seemed destined for greatness.

If looks are all that matters, then from the very beginning, Crimson Peak delivers. The movie features lush, in­teresting visuals. However, the weakest part of the movie is also presented at the beginning—the decision to show the main character at the end of the movie. With that reveal, a lot of the tension in otherwise solid scenes is ruined, as you know that Edith, played by Mia Wasikowska, is going to make it through, at least for a while longer.

Edith’s last name is Cushing, pre­sumably a nod to the classic horror movie actor Peter Cushing. Indeed, a lot of the movie feels like it was inspired by other gothic horror films, like House of Usher. This homage makes the mov­ie feel familiar, especially if you’re a fan of the genre. The plot, too, is mostly predictable, with few surprises occur­ring throughout the story. 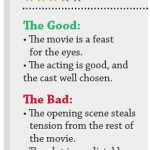 However, that doesn’t make Crim­son Peak boring. If the visuals don’t ensnare you, the actors will. Each per­son was well cast, with Mia Wasikows­ka being perfect for the role of Edith, an American heiress who finds herself drawn to Tom Hiddleston’s charming Sir Thomas Sharpe. This romance ele­ment is nearly as prominent as the horror element to the movie, and plays a large role in the plot. Of course, noth­ing is what it seems with Sharpe, nor with his sister, Lucille, played by the scene-stealing Jessica Chastain. The real tension comes into play when the three leads come together in Allerdale Hall, known by the locals as the titular Crimson Peak.

It is here, at Crimson Peak, the an­cient, crumbling mansion where the visuals really get to shine. There’s never been a mansion that’s looked so foreboding, and when Edith starts see­ing scary things, they look right at home. If there was ever a place that said “Come here if you want to be haunted,” it is this mansion.

This leads us back to the problem of the predictability of the plot. There are scary moments in the house, plen­ty of them, but when Edith is looking for answers, the audience has them figured out. It’s not hard to guess what secrets certain people or entities are hiding, for the most part, especially with all the foreshadowing. It can make you frustrated that Edith is seemingly slow on the uptake.

However, all frustration vanishes when Edith finally gets her answers. The movie kicks into high gear for an intense climax, taking full advantage of the creepy mansion set, inside and out. Aside from one silly ghost effect, the ending really delivers, both as a struggle for survival and a tying up of loose ends.

Overall, Crimson Peak is worth a watch, especially if you love lavish vi­suals and great acting, which elevates the predictable plot into something more.