Seclusion, desperation and insanity. These and many more are traits exhibited by Red Barrels’ latest game, “Outlast 2.”

“Outlast 2” is an amazingly horrifying experience that traverses outright disturbing material and topics. In the original “Outlast,” the player had to survive a mental asylum and witness a wide variety of insane things. In the sequel, the player takes the role of investigative journalist Blake Langermann. After hearing about the discovery of an unidentified dead woman near the Supai region of the Sonoran Desert, Blake and his wife, Lynn, go to investigate the area. In typical horror fashion, things go horribly wrong very fast. After a helicopter crash, both Blake and Lynn get separated, and Lynn gets captured by the local residents that are very reminiscent of Stephen King’s “Children of the Corn.” Blake must find his wife and a way to escape, whilst surviving the religious zealots and their attempts to kill him.

One of the most alluring — and complained about — aspects of the original “Outlast” was the player’s complete helplessness. The only options given to the player were to run or hide. This lack of ability gave the game an immersive feeling of dread, as if the player was experiencing this powerlessness themselves. If caught by enemies, there was no option of self-defense, so they were either hopelessly beaten, or immediately killed.

Though this aspect was a positive experience during the early portion of the game, it quickly became too much of a good thing. Gameplay became insanely repetitive as there was really no diversity in gameplay segments.

“Outlast 2” tried to remedy this problem by adding in new hiding mechanics and expanding the area in which the player roamed about. As mentioned prior, the player is no longer playing in a cramped building with narrow hallways and multiple small rooms. The sequel takes place outside with large open areas with noticeable different detail in each area. It truly feels as though the player is stranded in a town cut off from the rest of society. The player takes full use of this new terrain, as they are offered much more variety in places to hide from enemies. For example, the player can hide in a barrel filled with holes that allows them to still view the immediate area. Another great addition was having the player utilize acres of corn fields for cover while hiding from enemies.

Though the game does offer diversity in gameplay this time around, it remains otherwise largely the same, bringing back the same positives and negatives. Much like previous protagonist Miles Upshur, Blake is a wet noodle when it comes to defense and combat — he can only run or hide. There are also some sections in the game where the choice is limited further to run away … or … run away. These scenes are tightly focused and intense. As the route is not obvious, these sections can be frustrating and it may take some trial and error to succeed. 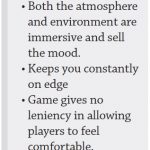 Aside from the lack of player ability, the storyline in “Outlast 2” is more grounded and well-paced than its predecessor’s, which only had one goal — escape from the asylum. This overly simple mission turned confounded. This problem was remedied in the second game where the player still needs to find a way to escape, but the top priority is rescuing his wife. This objective never changes or becomes too complicated. Along the way, Blake comes across a multitude of horrifying things — this is where the game truly shines.

This game pushes the boundaries of what can be shown in an art medium, leaving even horror fans uncomfortable. At one point, a pickaxe wielding enemy chases Blake and will kill him if he’s caught. If caught, the pickaxe is driven into Blake’s pelvic region and dragged out of him resulting in mutilated genitalia. This is just one of many different elements that will leave players uneased.

Besides the physical elements of the horror, there are also themes of religious corruption and abuse of power throughout the game. There are sections where Blake will transport to a school and relive memories that underline a traumatic experience. These flashbacks are spread out and each one gets progressively more twisted and nightmarish, symbolizing Blake’s downward spiral into insanity.

“Outlast 2” is an overall unsettling experience. The terrifying elements of both mental and physical dangers allow it to shine as an amazing horror game. It has one of the greatest immersive experiences and if players can handle the mature themes and aren’t shy with violent material, “Outlast 2” they will not be disappointed.