Unfriended, directed by Levan Gabriadze and written by Nelson Greaves, is a found-footage horror film about a teenage girl seeking re­venge on those who had wronged her. As I stepped out of the theater, I was torn between liking this movie, and finding it boring and disliking it.

First off, the premise. Yes, the premise is nothing new. A spirit com­ing back from the dead to haunt those responsible for said spirit’s death is nothing new or revolutionary. It’s a premise in the horror genre that is getting bland. Because of this, the movie would be another generic para­normal horror movie if it wasn’t for how it was done.

The story is about a girl named Laura Barns who commits suicide due to bullying. She comes back from the dead to torment and find out who was responsible for the source of the bullying by finding out who posted a video online that had set all of this in motion. 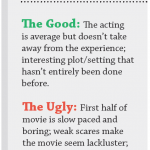 The reason why Unfriended man­ages to make this premise unique is by how the setting is displayed. The entirety of the movie takes place on a computer screen. All the interac­tions from other characters come from web services such as Skype and Google. However, this is also the big­gest weakness of the film. At the be­ginning, the setup is dragged out and seems like it takes forever due to the fact that the audience is pretty much just watching someone message someone else on the computer. It’s boring to watch and disengaged me from the movie.

When the movie finally picks up its speed for the latter half, it’s also just as disappointing. All the scares in the film aren’t really that scary due to it all happening from a tiny win­dow from a webcam that is only part of the entire screen. It also doesn’t help that the webcam footage bugs out from time to time and only gives you a clear view every couple of sec­onds.

The acting in the movie is okay. It feels like they are actual teenagers who are having a conversation with each other. When Laura begins to psychologically mess with each per­son, you get immersed into it. I won’t write too much about the characters due to spoiler reasons, but I really disliked every character and didn’t feel sorry or sad when they began to get tormented. This wasn’t a negative toward the movie. The movie made it to where the audience would dislike all the characters. They were all very horrible people and the feeling only gets worse as the movie goes on and more information about them is re­vealed.

All in all, I enjoyed watching Un­friended to some degree. It has a somewhat new premise that uses online bullying as its backbone. The way the movie is displayed will turn off some viewers, while some might enjoy how different it is from other movies. However, Unfriended to me is nothing more than an average movie. Not good or bad, just average.

Video Game Pre-orders: Are They Worth It?