Kingdom Hearts 2.8” is more than a game. To be more specific, it is a collection of lthree things in addition to the game. One is a three-hour prologue to “Kingdom Hearts 3,” another is an HD port of a Nintendo 3DS game on the PS4, and the last one is an hour-long movie that left me in a state of, “What the hell did I just watch?”

“Kingdom Hearts: Dream Drop Distance HD” serves as the main chunk of content for the collection, but it is also its biggest fault. The reason for this is the major problems of both the plot and how it is delivered.

As in most of the previous Kingdom Hearts games, the player plays as the series’ main character, Sora, as well as the secondary character Riku. The first thing to note when starting up “Dream Drop Distance HD” is that the story is unrelenting to both newcomers to the franchise and series veterans. It immediately kicks off with sending both Sora and Riku to a dream like world where they must complete a series of tasks to pass an exam in which they become Keyblade masters.

Such a simple premise quickly becomes the master of inception-isc storytelling, with flashbacks within flashbacks and constantly shifting perspectives between both Sora and Riku. There are also elements of time travel, doppelgangers and a prophecy of a battle between both good and evil that help turn a simple story into a grade-A cluster of information overload. This will leave players scratching their head wondering what just happened.

Combat in the game remains largely unchanged from previous entries in the series. It is still the standard Japanese role playing genre of pressing the X-button to attack while using the D-pad on the controller to scroll through the different options such as healing or using magic.

The few elements that are new transitioned poorly to the PS4. Since this game was originally on the 3DS, there were touch-screen features that made the transition in an awkward way. One of these failed transitions is on the first level of the game where the player can sling barrels at enemies. This is done by using the analog sticks almost like using fingers on a touch screen. The controls in this section felt weird and unresponsive at times.

Some of the other new features include parkour and drop timer mechanics. The parkour allows players to use the environment to jump around the map quickly and is a nice addition that doesn’t completely overshadow the old mechanics. The drop timer dictates the amount of time a player can play as either Sora or Riku. It causes a drastic shift in both the gameplay and narrative because Sora and Riku have different storylines. Having such an immediate shift can cause confusion and frustration — especially if the player was in a boss fight at the time of the character switch.

The visuals in “Dream Drop Distance HD” are also disappointing. Though it is a port from the 3DS and the game looks better than the original, it’s sad to see it didn’t make full use of the PS4’s hardware — unlike the other two in the collection.

The combat in “A Fragmented Passage”, unlike in “Dream Drop Distance HD,” feels more fluent and less clunky. It is also more pleasing to watch, especially with the beautiful particle effects from Aqua’s magic, such as during the fire and lightning spells.

The story is also much simpler than “Dream Drop Distance HD,” as it has a semblance of trying to explain past events to players through a journal section in the menu. Though it is a bit of a read and info dump, it is nice to see effort put into explanations of past events in the series.

The only negative is that the game is short at only three hours long. Though it has some replayability with new game plus, which offers a new difficulty after completion and side objectives for cosmetic changes, it doesn’t really offer anything that would entice players to play it a second time. 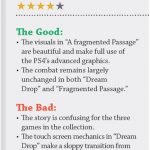 The final part of the collection is the very definition of confusing. “Kingdom Hearts: Back Cover X” is an hour long movie that tries to summarize events from the mobile game. It serves as a prequel to events before “Kingdom Hearts” by trying to explain the historic event of the franchise known as the Keyblade War. However, the way “Back Cover X” goes about doing this is by introducing seven new characters and the falling out of their relationships. This doesn’t make sense since no one knows who these characters are or why they should care. The short movie also ends in an anticlimactic way that further increases the confusion on what happened.