While “The Neon Demon” succeeds at stellar cinematography, it lacks in just about everything else.

“The Neon Demon,” a 2016 movie, has graced its presence upon me almost a year after its release. While the aesthetics dazzle, the only way you’ll get through the dialogue is by taking prescription medications.

In all fairness, the camera shots amaze — if you watch as a film critic. As an person watching for entertainment? Blah.

Thankfully, I can at least say I lived a peaceful 20 years before I saw the movie that left me physically angry that I wasted a painful 118 minutes of my life.

From director Nicolas Winding Refn, the movie’s trailer presents “The Neon Demon” as one of the best movies of the year. Unfortunately, the producers took clips out of context to form the trailer in an attempt to mask the main idea behind the film: “let’s see how many edgy camera shots the audience will sit through before running out of the theater screaming.”

To launch her aspiring model career, main character Jesse (Elle Fanning) moves to Los Angeles. Upon arrival, an agent tells her that she’s a star. A large portion of the plot then shifts into other models hating her for her natural beauty that apparently nobody else has. She’s never had plastic surgery or dyed her hair. But the movie stalls — that’s the entire plot.

She then gets sucked into this seemingly drug-induced world of models who become psychotic killers — don’t worry we’ll get to that part. They hate her because she quickly rises to success after little to no work while they have tried to claw their way to a modeling career for years without quite making the cut.

Jesse starts out as a naive yet daring girl but rapidly turns into the vainest character in the film. Jessie always had a creepy vibe to her character. She says, “You know what my mother used to call me? Dangerous. ‘You’re a dangerous girl.’ She was right. I am dangerous.”

All mothers I know groom their children to manipulate and bask in danger — seems realistic.

Maybe this movie tries to say something deeper — like don’t expect a lot from a random movie you find on Amazon. In all seriousness, it makes sense. Jesse constantly says that “beauty isn’t everything, it’s the only thing.” When she says “Beauty’s the only thing,” I believe she references the movie’s lack of plot and decent camera shots.

Am I stretching to find a meaning? Probably. However, you would search for meaning too if you’d just wasted two precious hours of your life.

After some seemingly human encounters with normal people instead of crazed models, you get hopeful that the film will get better. Spoiler — it doesn’t. At one time I shared your naivety and hopefulness for improvement. If we’re being completely honest, I sat through this movie so you wouldn’t have to (you’re welcome).

Jesse ends up living with a hairdresser named Ruby, the only person that’s sort of her “friend.” However, she’s not really looking out for Jesse. I wouldn’t want to spoil what interesting encounter leads to this conclusion, but Ruby’s definitely not normal — let’s just leave it at that. 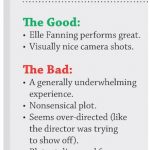 The models get tired of Jesse’s vanity and suddenly they’re running through a creepy old mansion with knives. And … scene!

The ending blatantly tests the audience. I’m pretty sure this horror movie remains in this genre because it could literally bore the audience to death. And by bore, I mean it keeps enough attention so you think it’s getting good, and then sorely lets you down time and time again — like that ex that just won’t go away.

The wrap up for this movie contains one of the most disgusting things I’ve ever seen. Let’s just say some cannibalism took place. That’s saying something seeing as I consider myself somewhat of a horror aficionado.

I understand what Nicolas Winding Refn attempted to do. I really do. Maybe it’s my fault for watching an artsy horror movie. But in all fairness, the trailer definitely draws you in. In actuality, they spent so much time trying to act cool and indie that they forgot to write the plot.

Opinion: The US is stuck in a sand trap

Review: ‘The Fate of the Furious:’ A fun ride from beginning to end