I can’t pretend to be impartial—I wanted Zoolander No. 2 to be amazing. Zoolander is one of my favorite mov­ies, and no matter how many times I’ve watched it, it still makes me laugh. So when I heard that a sequel was com­ing out, I was psyched. I knew that comedy sequels are rarely good, but I still had high hopes. The trailers made me laugh. Perhaps this would be a rare great comedy sequel?

Zoolander No. 2 is a bad movie and a terrible sequel. While the first Zool­ander movie was set in the “real” world, Zoolander No. 2 scoffs at it, throwing in random supernatural el­ements. Elves? They exist! Humans and animals interbreeding? Why not? Male pregnancy? That’s a thing. A fountain of youth? There’s our plot! It doesn’t make sense to change the set­ting to this place with random magic, but Zoolander No. 2 isn’t afraid of be­ing stupid. These elements are jarring and don’t fit, especially in a movie populated by celebrities playing them­selves.

This brings us to the cameos. If you’ve seen the trailers, then you’ve seen only a couple of them, as it feels like you can’t watch a single scene without another celebrity or ten pop­ping up. At least Justin Bieber in the opening scene is relevant to the plot and is somewhat funny. Most of the others are out of nowhere and point­less, like Katy Perry and Neil deGrasse Tyson (!) popping up on rooftops. At best, these cameos are pointless; at worst, they’re distracting and unfunny. Why did Fred Armisen have his head CGI’d onto a child’s body for a two-minute role? Why not have an actual child play the part? Is that Ariana Grande in a gimp suit? Why? She looks like she’s 12! Quantity does not equal quality; one well-done cameo, like David Bowie in the first movie, is bet­ter than a scene with a dozen awk­wardly shoehorned in celebrities in the sequel. 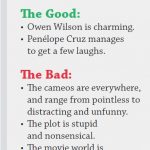 But what about the main cast? Ben Stiller and Owen Wilson reprise their roles as Derek Zoolander and Hansel McDonald, clueless male models. However, they never reach their po­tential, as the movie is more about crazy situations than the inherent hu­mor that comes from their characters. Also, Zoolander in particular comes across as more mean-spirited in this movie, whether he’s asking someone if they’re “fucking retarded” or con­sidering abandoning his son because he’s fat. Hansel comes across as much more likeable and smarter, but his subplot is bizarre—he lives with an orgy (his words) and managed to get each person involved, including an Elf, a boar, and Kiefer Sutherland, pregnant. It’s weird for weird’s sake, not funny. Will Ferrell returns as Mu­gata, the villainous fashion designer, but where in the first movie he came across as an actual person, albeit one going slowly insane, in this movie, he comes across as a cartoon character. An annoying cartoon character. The person who comes across the best in the movie is Penélope Cruz, who plays an Interpol agent, and manages to get in a few funny lines.

There are few lines that are actu­ally funny in this comedy.

Overall, Zoolander No. 2 is a huge disappointment. Even if it was a stand-alone movie, rather than a sequel, it would be a failure, as the biggest prob­lems—the cameos, the lack of logic, the lack of laughs—would still be there. However, being a sequel, you’ll constantly be reminded that you could be watching the original, actually funny, movie instead. Save your mon­ey. If you’re morbidly curious, wait to watch it when it comes out on Netflix. At least then, you’ll only waste your time, not your money.