Your Lie in April is a 2014 musical drama anime by A-1 Pictures that was recently dubbed in English and thrown up on Netflix. The show follows a quartet of Japanese middle schoolers through their senior year: a main character, a girl next door, a love interest, and one of those characters that the show frames as a main character, and pretends is a main character, but isn’t really a main character. The main character, Kousei Arima, is a smallish, black-haired, 14-year-old lapsed violin player and blah blah blah. Look, the details don’t matter. He’s the protagonist and that means we’re going to follow him through a sequence of several “inspirational” classical music renditions wherein he works through his emotional problems and we’re going to like it!

Kaori Miyazono, a pretty blonde musician, provides April’s impetus when she joins up with the starring group of childhood friends for a date with resident plot device Watari. Her exuberant violin playing inspires Kousei to the point where he describes her as bringing color back into his life. You might see where this is going and, yes, unfortunately Kaori is a total manic pixie dream girl. That is, a “quirky” girl driven entirely by her unspecified desire to break a (hetero male) protagonist out of their shell. A (also hetero male) writer’s construct, not an actual type of person with their own inner life and motivations.

Kaori’s particular quirk is her expressive violin playing, interpreting the score to make it her own, as opposed to the more competition-accepted technical playing, or replicating the score exactly as it was originally written. Kaori serves as a foil to Kousei, who falls on the originalist side of the division. His mother drilled into him the technical side of piano playing before she died, going so far as to beat him when he did not play perfectly. Your Lie in April loves to talk about this whole dichotomy. Despite continual discussion, this theme never really comes across well—without being trained in classical piano—it’s hard to even tell the difference between rigidity and interpretation.

Her life goal for Kousei, as it were, is to get him playing again. She wants him to realize that music is a part of himself that he cannot continue to self-abnegate. Kaori throws Kousei right back into the deep end, convincing him to be her accompanist for her next performance. In this she parallels Kousei’s mother while at the same time contrasting herself as the—appropriately quirky—nicer musical impetus.

Your Lie in April strikes a nice balance of dramatic and light scenes, never allowing its tone to become a burden.

It is disappointing, though, how April keeps bringing up Kaori and Watari being “a thing” into its later sections despite the complete lack of relevance to what’s happening onscreen after, say, episode two.

It’s much easier to disparage Your Lie in April while not watching and listening to it. You see, April flat out would not work without the music. It just doesn’t do subtle theming or complex character portrayals. Instead, it opts for moving, piano-scored sequences that are so beautiful as to make even the most callous, world-weary sort cry.

Your Lie in April is a master of direction, pairing tracks like Rachmaninoff’s “Love’s Sorrow” with appropriately affecting scenes to heighten the dramatic effect. A-1 Pictures weaves the different narrative elements of a piano performance—the performer’s inner monologue, memories via flashback, and the audience members’ reactions—together with a deft hand. Much like a song, the storyline is intertwined with the music in a beautiful cohesive package that’s easy to understand.

Your Lie in April has everything you would expect from a classical piano soundtrack: Beethoven, Mozart, and a lot of Chopin. A lot of the songs are liable to go over your head if you’re not acquainted, but the music is beautiful to any ear. The original soundtrack is competent, if not spectacular, using leitmotifs to follow their respective characters through the story. It takes a more modern, playful approach to the score, but the serious piano tracks are the ones that really stand out. 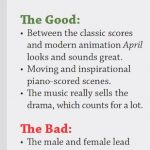 Your Lie in April may be all about the music, but the visuals are no slouch either. The animation can only be described as fantastic, embracing a color palette so wide it borders on magical realism. Character designs are expressive and fluidly animated, leaving no room in their landscape for the uncanny valley. One of the impressive aspects is how A-1 Pictures seamlessly blends the intricate 3D hand animation with everything else, which is animated in 2D. It really helps to convey the nuance of motion involved in playing a piano and sell those scenes.

There is good metaphorical representation of the feelings experienced at a piano performance, using imagery like blooming cherry trees and motes of golden light floating throughout the room to show the emotions evoked by the music. Some of the most visually compelling scenes are the performances shown through Kousei’s perspective. Hearing him talk about not being able to hear the notes he plays is not nearly as effective as seeing him at the bottom the ocean with all sound drowned out. This element is important to being able to understand Kousei’s character more considering his situation is not necessarily relatable in the literal sense—not everyone has had mommy issue-induced breakdowns on stage during a piano performance.