Marvel has been doing very well recently, with suc­cesses on both the big and small screen. This year’s Avengers se­quel brought in over a billion dollars worldwide, and Ant-Man was lucrative, albeit on a smaller scale. 2015 also brought the first series of Marvel and Netflix’s partnership, Daredevil, which received positive reviews, earning it a second season. Jessica Jones is their newest collaboration, and given the strength of all the other Marvel mov­ies and series, it needed to be some­thing special to stand out.

Fortunately, Jessica Jones is any­thing but ordinary. The series stars Krysten Ritter as the titular Jessica Jones, a “hard drinking, short tem­pered mess of a woman.” She works as a private investigator, scraping to­gether a living, but her past comes back to haunt her, putting her and everyone around her in danger. Oh, and she also has superpowers. This is based on a Marvel character, after all.

Jessica Jones deals with darker sub­ject matter than your typical comic book based adaptations, and with a rating of TV-MA, this series is defi­nitely not for kids. There’s plenty of sex, violence, booze, and more, and if you need a trigger warning, this series is not for you. Lots of bad things hap­pen—torture, self-harm, all types of assaults—and the characters have to fight to overcome these struggles. Al­though there are laughs, thanks in large part to Jones’s smar 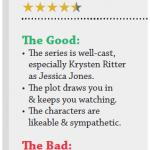 t mouth, this is far from Marvel’s more lighthearted romps like Guardians of the Galaxy.

So then, what’s so great about Jes­sica Jones? The plot, for one. The dark­er subject matter is necessary with the plot, which centers around a villain, Kilgrave, with the power to control minds, someone who Jones has previ­ously encountered. It sucks you in, and you want to know everything, from what went on in the past, to what he’s up to now, to how Jones will deal with it.

That leads to the next great thing about Jessica Jones: the characters. They’re all interesting, flawed people, and you can easily get lost in their world. Jessica Jones herself is the most fascinating, and with every reveal about her past, you can really under­stand why she does what she does. Her past is troubled, to say the least, and she attempts to subdue her demons with a massive drinking habit. The biggest reason she drinks is because of Kilgrave, played fantastically by David Tennant, a man with mysterious mind control powers. He’s a great vil­lain, one who you want Jones to punch in the face, but sometimes even the audience can sympathize with him. Other notable characters include Trish Walker, played by Rachael Taylor, Jones’s best friend and adoptive sister, and Luke Cage, played by Mike Colter, who in addition to being in this series, will get his own series next year. Pick any character out of the series and they’re sure to be great—even ones who seem annoying at first will grow on you.

In short, Jessica Jones has a lot to love, even if the prickly main charac­ter wouldn’t want to admit it. If the dark tone and addictive plot don’t suck you in, the flawed but likeable characters will.