If you love the original Archie Com­ics franchise and can’t get enough of the “Riverdale” series, “Chilling Adventures of Sabrina” should be your next Netflix binge. This new Netflix original series follows the original plot of the 1960’s comics, 1996 ABC sit-com “Sabrina the Teenage Witch” and 1999’s “Sabrina the Animated Series,” while giving a deeper, more mature look into the life of Sabrina Spellman and her journey of becoming a witch.

“Chilling Adventures of Sabrina” fol­lows half-mortal half-witch Sabrina (Ki­ernan Shipka of “Mad Men”) after she must sign her name to the Dark Lord on her 16th birthday. In order to study to become a witch, she must give up her free will and ability to live a mortal life. However, Sabrina currently lives a mor­tal life with her mortal friends, including the boy next door and love interest, Har­vey Kinkle (Ross Lynch), and her group of gal pals: the fierce Rosalind Walker (Jaz Sinclair from “Paper Towns”) and loveable Susie Putnam (“Nashville”’s Lachlan Watson). Throughout the series, Sabrina is forced to make a decision be­tween her mortal life and the witch world, where she would study to follow in the footsteps of a long lineage of witches in her family — including her aunts Zelda (Miranda Otto) and Hilda (Lucy Davis). 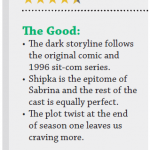 Because the “Chilling Adventures of Sabrina” was created by the same creative team as the CW series “Riverdale,” it fol­lows the same gloomy, dark storyline with a hint of brooding teenage drama and minor comedy. If you haven’t watched “Riverdale,” you could also com­pare the show to the “American Horror Story” series mixed with “Buffy the Vam­pire Slayer.” All in all, “Chilling Adven­tures of Sabrina” brings darkness to the table, leaving audiences satisfied but craving even more of Sabrina’s story.

The casting in this TV series is one for the books. Shipka plays the epitome of how Sabrina should be: quirky, kind and cunning. She rocks the iconic blonde bob, ’90s style and curious de­meanor. Aunts Zelda and Hilda are also close to their original characters — Zelda is more polite and to the books, while Hilda is the dimwitted, loving sister. Lynch, known for his role in Dis­ney’s “Austin and Ally,” plays the perfect Harvey Kinkle, exhibiting the beloved naivety and loyalty of Sabrina’s love in­terest. Even the new characters to the series, Ros and Susie, had interesting storylines and back histories, giving the plot a little extra spookiness.

Although the storyline was devil­ishly tasteful and the cast was nearly perfect, there were some flaws to the show. As a fan of the sit-com with Me­lissa Joan Hart playing Sabrina, I was hoping for more comedy and maybe not as many brooding episodes. Also, Salem the cat played a much smaller part than in the sit-com. This disappoints because the original Salem serves as Sabrina’s Jiminy Cricket-esque conscience, rather than just her familiar (the animal given to a witch to help them). Although this series falls more under the plot of the comic, there should have been more comical aspects to it, maybe even having a certain character provide comic relief so it wouldn’t be too serious.

Without giving too much away, the end of season one leaves audiences with one major plot twist. We’re left asking: What will happen to Sabrina Spellman? She is notorious for finding the truth and resolving unfinished business, but whether or not that qual­ity will end up getting her into trouble is the end question.

If you need a new series to binge watch on Netflix while procrastinating for midterms, make sure to put “Chill­ing Adventures of Sabrina” on your list.