Marvel and Netflix have successfully teamed up so far, bringing us Daredevil and Jessica Jones, with more series yet to come. Daredevil was its first hit, and thus the first to get another season. The question is, is its second season as good as the first?

No. It’s not as good as the first. While it is still an interesting look at Matt Murdock, who is a lawyer by day, and the titular Daredevil by night, it feels like it’s lost a little something between seasons.

The biggest loss is the humor. Season one had some dark subject matter—a man does get his head crushed in a car door—but it also had a dose of levity to brighten the mood. While there are some jokes throughout season two, it feels grimmer, darker, and not as fun as the first season. Characters who were once close move apart and you miss the easy sense of comradery. Daredevil’s secret identity, Matt Murdock, isn’t featured as much, so we don’t get as many scenes of him with his friends, which is a shame. Matt, played by Charlie Cox, Foggy, played by Elden Hensen, and Karen, played by Deborah Ann Woll, have great chemistry, playing off each other like they’re the Three Musketeers, and it’s sad when they drift apart. The show is moving to darker places, and it seems to think that there should be less room for a lighter touch, while in fact the darkness makes you long for a bit of levity.

It feels like a darker show in a literal sense. So much happens in shadows, dark halls, and the lake. I know Daredevil as a hero who patrols by night needs darkness by necessity, but it sometimes gets dreary. It leaves you longing for a splash of bright color just to break up the monotony. Metaphorically, Daredevil feels darker because of a new level of violence. While season one was certainly violent, earning its TV-MA rating, season two tops it. People are shot to bits, hung from meat hooks, and have their throats slit. If you’re squeamish, this is not the series for you. 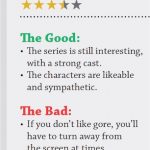 The action, overall, is solid. A couple of the scenes go on too long, like the one where Daredevil is forced to fight with a gun taped to his hand, which seems to go on forever. However, there are some amazing fights, with one battle shown only through shadows on a screened wall, making it look two dimensional. It’s the unexpected and the new fights that really delight, and where the show can shine.

Also standing out in this season are the side characters. While the series is all about Matt Murdock, in this season, we get to see Foggy, his best friend and partner in the law firm, and Karen, their office manager and love interest, develop on their own. As Matt is more concerned with his alter ego, Foggy and Karen have to keep the firm together, and they both shine under pressure. At the end of the season, it’s clear that although they both deeply care for Matt, they don’t need him and might even be better on their own. It’s sad to see them losing their closeness, but at the same time, it gives their characters more of their own, separate identities.

The plot overall seemed less cohesive than the first season. It was cool to be introduced to the new characters, the Punisher and Elektra, but at the same time, it seemed like the story was messy. Season two’s plot definitely feels more like something yanked from a comic book than the first season, which felt a bit more “real.” Still, it does keep you interested in what’s happening.

Overall, Daredevil, while not as fun as the first season, is still a risk worth taking. Watch the full second season exclusively on Netflix.