We live in a country filled with choices. One choice that is becoming more and more popular is to marry later or not at all. All the Single Ladies by Rebecca Traister addresses this choice, revealing how women who do not marry or marry later have brought change. She uses history, statistics, and personal interviews to show how single women are changing their lives, the nation, and marriage itself.

All the Single Ladies starts out strong, with tales of politics and femi­nism, revealing that in the 1960s, fem­inism was often discussed in terms of balancing “marriage and motherhood and work,” with single women being ignored. It’s eye-opening; unfortunate­ly, the chronicles of politicians blaming women for the collapse of moral stan­dards is all-too familiar.

The second chapter is by far the most interesting chapter; it gives a brief but fascinating history of single women throughout American history. Many prominent female activists were either single or married late in life, like Susan B. Anthony, and it was not by accident. If a woman could manage, economi­cally, to live without a man, she had a world of choices available to her that a married woman would not. The anti-slavery movement was aided by single women, which lead to the women’s rights movement, which in part inspired Prohibition, which banned alcohol for over a decade. The history is fascinating, and although there are bits of history sprinkled throughout the other chap­ters, it is here that it really shines.

Unfortunately, the book soon veers off into chapters that feature the least interesting aspect of the book—the personal interviews. Traister profiles several modern unmarried women, and for the most part, their stories are dull. One feels like New York City is her great love, and not a man! Another is far too busy to schedule time for a relationship! The reasons may be valid, but the wom­en do not come across as particularly interesting or worth featuring. So two women consider their friendship more satisfying than a romantic relation­ship—so what? Traister may be trying to show how varied unmarried women are, but it is better accomplished through her use of statistics.

The statistics sprinkled throughout the book are fascinating. In response to the allegation that single people are “selfish” for not having a family, she cites a report showing that 84% of un­married women “offer practical help” to their parents, versus 68% of married women. Single women make up large voting blocks and buy homes at nearly double the rate of single men. On the other hand, women are still earning less and rarely getting high-power po­sitions like CEOs. There is a lot of re­search put into the book, and it makes the author’s arguments sound more compelling. 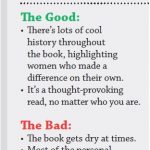 One area, in particular, pops up throughout the text—the political re­sponse to women not getting married or delaying marriage, having children out of wedlock, and having fewer chil­dren. Traister points out that the gov­ernment encourages traditional mar­ried families as a way to avoid poverty, and that it is easier to promote that than it is to address the underlying econom­ic issues. I don’t think there’s a single chapter where there isn’t a reference to a politician saying what’s best for a woman or a family, like Jeb Bush saying that “women on welfare ‘should be able to get their life together and find a hus­band.’ ” Unsurprisingly, there is very few mentions of men being told to get mar­ried and have families.

It would have been nice to have a little bit about single men in the book; if so many women are choosing to stay single or to avoid marriage, it makes you wonder where the men fall in the equation. However, this is a book about unmarried women, so it is not as if it is missing a vital part—just a curiosity.

Overall, All the Single Ladies, de­spite its dull parts, is worth a read if you’re at all curious about how single women and society meet. The history is fascinating, the statistics interesting, and you are sure to learn something.

Current Generation of Orcas at SeaWorld Will be its Last