Fast Girl: A Life Spent Running from Madness follows the life of Suzy Favor Hamilton, an Olympian runner who, despite her athletic achievements, feels that she can never be good enough. From an early age, she realizes she has a gift for running, and through running, she aims to bring pride to her community and her family.

She strives to be perfect to make up for her strained family life, caused by her older brother Dan, who suffers from bipolar disorder. It is this disorder that the memoir’s subtitle comes from, and indeed Favor Hamilton is trying to escape it throughout—first her brother’s mental illness, and then her own. Running is a tool for her to escape her home life as well as a passion, but the further you read, the more damaging running becomes, physically as well as mentally.

If you picked up this book because you wanted to know more about Favor Hamilton’s athletic career, she goes into it in some detail, starting with her first victory in elementary school. She goes into detail of all the pressure she felt, especially the stress she put on herself to win. Winning was everything to her, and if that meant developing an eating disorder, ignoring her family, and getting a breast reduction to look more like a professional runner, so be it. Due to this attitude, running became something incredibly stressful to her, rather than a source of joy.

However, there is far more to the book than Favor Hamilton’s athletic career. Once she retires after giving birth to her daughter, her mental state already stressed, she changes for the worst, and starts using antidepressants. They help her to feel better, but after a while, she’s taken off the medication and soon feels worse. Going back, she gets a new prescription, but unknown to her, it will turn her world upside down, as the medication puts her undiagnosed bipolar disorder in full panic mode. Favor Hamilton feels and acts like a whole different person, and that leads her to another, more lurid career—that of a call girl. At the time, prostitution was not legal in Vegas, so she kept her job as a sex worker discreet, which was part of the allure. 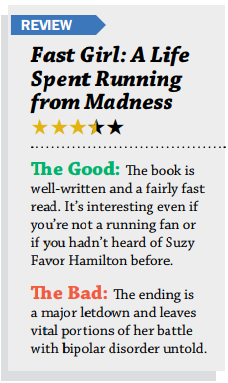 The book does an excellent job of laying out how this happened, as the change from an athlete to a call girl at first sounds like a stretch. A large portion—around a hundred pages—is devoted to her life as a sex worker.

Favor Hamilton describes it as the result of her undiagnosed bipolar disorder mixed with the wrong medications, and indeed her life at the time seemed to be in a downward spiral that only she could not see. She loves her call girl life and the thrill it gives her, and there are plenty of salacious details for the reader. If you picked up this book to learn about her life as a call girl, you won’t be disappointed. Favor Hamilton feels like she’s on the top of the world, but soon, the media discovers her secret life. It is after this point where the book lets the reader down. Throughout the book, there have been mentions and asides about bipolar disorder, and, especially when she is writing about her life as an escort, you can see how having the disorder has changed her life. However, the last chapter ends with a line stating that she was diagnosed with bipolar disorder, while the epilogue contains very scant details.

It leaves the reader feeling cheated; after all, the blurb on the dust jacket describes the book as “a woman’s struggle to outrun her demons and finally find peace,” yet we never get to see her find peace. A four-page epilogue is not nearly enough space to resolve all the issues brought up in a almost three hundred-page memoir. We don’t get to learn her reaction to having the same condition that eventually caused her brother to take his own life, and we don’t get to see her struggle—if there was one—to recovery. We get to see flashes of her lowest moments and then an epilogue that says she’s all better now. That’s not enough. After such an emotional journey, we want to have closure and witness her healing, but we are left dry.

Overall, Fast Girl: A Life Spent Running from Madness is a fascinating read that flies by, even if you have never heard of Favor Hamilton or don’t particularly care about running. It is just a pity that it’s dragged down by its ending, which does not fulfill readers’ expectations.

Voice Actors Cry for Fair Treatment in the Gaming Industry