Reality shows are already the junk food of TV—they’re cheap, with no obvi­ous benefits to the viewers, and yet hard to resist. You know there’s a documen­tary on PBS, something potentially en­riching, and yet you can’t change the channel from the mess you’re watching. With reality competitions, the high stakes make it easy to pull you in. But with ABC’s new reality competition, My Diet is Better Than Yours, everything about it feels low stakes.

My Diet is Better Than Yours has five contestants, each of whom is on a differ­ent diet plan, coached by an expert in the diet. There’s a weekly weigh-in, and the contestants can switch diets if they think theirs isn’t working. At the end of the competition, the person who loses the most weight will walk out with fifty-thousand dollars.

If you think that feels exploitative of the contestants, you’re right. Although the trainers and the host, Shaun T., cre­ator of the popular Insanity workout, do toss in some references to the contestants other health stats, like blood pressure and blood sugar levels, it’s all about getting the weight off, and fast. It’s weird to see a health problem being treated as a com­petition, even if it’s not the first time it’s happened—The Biggest Loser series is the wildly successful proof of that.

It still leaves you with a bad taste in your mouth, especially when you hear some of the things the contestants are saying. The expectations to lose ridicu­lous amounts of weight a week is intense, with one person being sad they “only” lost six pounds in a week. Yes, it’s a com­petition, but it’s hard to hear that some­one truly believes a six pound loss in a week isn’t amazing. It reeks of the worst of diet culture, of the promises to “lose thirty pounds in thirty days” with what­ever magical food, workout, or pill is being shilled. It’s troubling to imagine others adopting this attitude.

Some of the craziest things, however, come from the trainers, with one forcing his contestant to write his own obituary in order to motivate him to change his life. Another said, and I quote, “God will totally not mind if she [exercises] while she’s praying—Besides, I’m sure He wants her to lose weight.” Their devotion to their diet systems borders on cultish, which can come across as creepy. Each trainer truly believes their system is the best, and is determined to prove it t 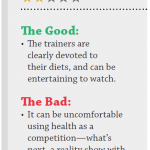 hrough their contestant, mainly in drop­ping the most weight.

There are mini fitness competitions in each episode, ostensibly to help train the contestants for a half-marathon which they must compete in order to be eligible for the grand prize. However, the competitions are boring, as victory means nothing, and thus there are no stakes, and it’s not interesting to see five out-of-shape people literally walking through fitness challenges. As a competition-based reality show, it fails to engage on the competitive aspect, especially since none of the contestants get kicked out of the competition if they don’t do well.

The contestants can’t be kicked out, but they can ditch their diet plan, and each person is allowed to change diet plans only once. After that, there’s not much reason for suspense—the only thing that’s left to wonder is how much weight has been lost at the end of the episode. The winner of the weigh-in is offered the dubious prize of the chance to switch diet plans first, as only one per­son can switch plans per weigh-in, and then only one time, so the winner really gets nothing, as no one wants to quit a plan that’s making them lose weight. It’s not exactly gripping material.

So, will I watch it through this season? Maybe. It’s a short series, due to finish by the end of January, and I am vaguely curious about which contestant will lose the most. If it was a longer series, I’d stop watching, as it’s not that interesting, but since it’s short, I might continue, if only to see what weird things a trainer says next.

Should you watch My Diet is Better Than Yours? I wouldn’t recommend it. In the end, its views toward health are off-putting and there’s not enough stakes to make the competition worthwhile.

Locking Students Up For Missed Assignments

It’s the Journey Not the Destination: Finding Noah Review